Borse Dubai said in a statement that the combined group would maintain OMX’s Nordic market model and establish the OMX brand as the group’s “global platform for international growth”.

Essa Kazim, Borse Dubai’s chairman, said: “This combination will establish OMX as the group’s global platform, building on OMX’s leading technology and strong brand to position it to become one of the fastest-growing exchange networks in the world.”

Speculation about a possible bidding war for the Nordic bourse has been high since last week when Borse Dubai came under pressure to unveil its intentions following a number of share purchases for OMX.

At the time, Nasdaq said it would stay firm in its offer and urged OMX shareholders “to take no action with respect to the conditional offer by Dubai for a minority stake in OMX”.

Earlier this year, Nasdaq lost its battle to cross the Atlantic with a failed bid for the London Stock Exchange.

Dubai’s takeover plan is believed to be being orchestrated by Per Larsson, former OMX head, who is now the chief executive of the Borse Dubai-owned Dubai International Financial Exchange.

Larsson left Stockholm-based OMX in 2003, after helping the company begin its merger process with the exchanges in Finland, Estonia and Latvia.

The company also launched an unsuccessful bid for the London exchange in 2000.

OMX, which is now run by Magnus Bocker, has become the largest stock market in the Nordic region through the merger of seven stock exchanges in the past four years.

Nasdaq launched its offer for OMX in May and many analysts believe it plans to use the acquisition to persuade LSE shareholders to agree to a deal creating a giant European exchange. 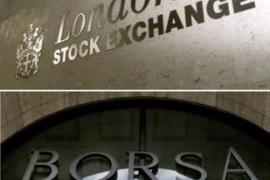 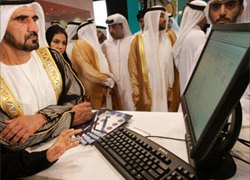 Trading has kicked off at the new Dubai International Financial Exchange, which the emirate hopes will promote its aim of becoming a global financial hub.

This week’s opening of an international stock exchange in Dubai marks another step towards its goal to become the global financial hub between Hong Kong and Frankfurt.