Vietnam, ranked 142 in the world by Fifa, pulled off a stunning 2-0 upset over Gulf Cup champions United Arab Emirates in their Asian Cup in front of a raucous home crowd at the My Dinh National Stadium in Hanoi on Sunday.

Playing at Asian Cup level for the first time in nearly 50 years, the joint-hosts opened the scoring on a three-man counter-attack from the halfway line in the 63rd minute when Huynh Quang Thanh, Vietnam defender, ran up the right side, weaved into the box and slapped the ball into the left corner of the net.

Striker Le Cong Vinh, Vietnamese player of the year, added another goal 10 minutes later as he controlled a long ball in front of the penalty area and lobbed it into an open goal to send the local crowd wild.

“Basically we were lucky because the UAE were obviously upbeat after the Gulf Cup.

“But our players decided everything. It was a good start.”

The UAE were the aggressors in the first half as strikers Ismail Matar, who scored five goals in the Gulf Cup in January, and Faisal Khali led their assault against a poorly organised Vietnam side.

Mohamed Al Shehhi, another UAE front man, struck a 25-metre shot into Vietnam goalkeeper Duong Hong Son in the 13th minute, but that was about as close as the Gulf side got.

Vietnam squandered their first scoring chance in the 16th minute when forward Phan Thann Binh headed a free kick from Le Tan Tai onto the woodwork when he should have buried it.

A minute later Matar slammed a free kick into the heroic Son, but nothing was going right for the team ranked 48 places higher than their opponents.

On a counter-attack, Le Cong Vinh fed a side pass at the arc to Phan Van Tai Em who floated the ball far over the bar in the 20th minute.

Matar squandered another free kick in the 27th minute, before Khali dribbled past a defender but did not capitalise on a one-one-one situation in front of the goal five minutes later.

Vietnam bounced back into the action eight minutes before the break when Phan’s overhead kick sailed over the bar and a Nguyen Minh Phuong rocket was stopped by UAE keeper Majed Naser.

The hosts went on the attack after half-time and always looked the likeliest to score, with a fully packed 40,000-strong partisan crowd on their feet cheering loudly when Thanh volleyed home just after the hour mark after an embarrassing mix-up in the UAE defence.

Vinh doubled Vietnam’s advantage in the 73rd minute after springing the offside trap and finishing with a delightful lob from the edge of the area to seal the match.

UAE struggled, with Matar having their best second-half chance in the 81st minute when he powered another free kick wide.

Bruno Metsu, the UAE’s French coach, paid tribute to Vietnam, but said his side were not out of it yet, pointing out that they lost their opening game at the Gulf Cup in January before bouncing back to win the tournament.

“I am not surprised, they played a fantastic game,” Metsu said.

“We missed many opportunities to score. After half time, I think small details changed the game but football is football.”

Vietnam will next play Qatar on July 12, while the UAE face defending champions Japan on July 13.

Japan and Qatar face off in their opening Group B fixture on Monday. 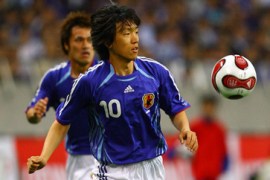 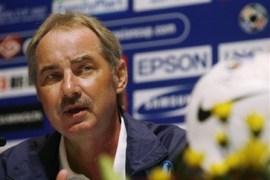 Vietnam coach Alfred Riedl looks past the Asian Cup and towards regional glory. 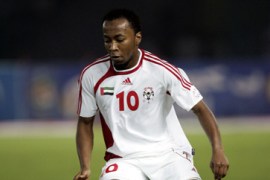 The UAE’s star striker is battling injury and form worries ahead of the Asian Cup. 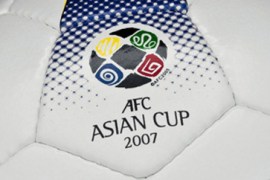 All the fixtures, results and tables for the 2007 Asian Cup.