Innocence protested
The rider has maintained his innocence, arguing that test results “simply make no sense.”
“Given all the attention paid to doping offences, you would have to be crazy to do what I have been accused of, and I am not crazy,” Vinokourov said.
The Vinokourov saga was just one of a series of doping scandals to rock this year’s Tour.
Tour leader Michael Rasmussen, who looked set to win the race, was expelled by his Rabobank team for lying about his whereabouts after missing two doping tests.

T-Mobile rider Patrik Sinkewitz also failed a pre-Tour test for testosterone that was only discovered after the start of the race.

Vinokourov used a blood transfusion from a compatible blood donor, rather than his own blood, which made it easier to see anomalies during the blood test.
Blood transfusions work by increasing an athlete’s count of red blood cells, which carry oxygen to the muscles.
Source : News Agencies 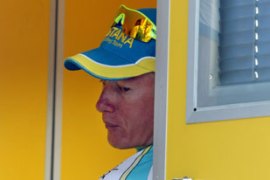