Munir Mangal, a deputy interior minister leading the talks, said: “We believe in the talks and if dialogue fails, then we will resort to other means.”

When asked if that meant use of force, he replied: “Certainly.”

Baek Jong-chun, the South Korean president’s personal envoy, has been in Kabul for more than 24 hours, according to Afghan officials, but so far has not met Hamed Karzai, the Afghan president.

Deadlines given by the Taliban to reach an agreement have passed without incident, but one of the original 23 captives, the leader of the group of Christian aid workers, was shot dead on Wednesday.

The kidnappers have demanded the release of eight Taliban prisoners held in Afghanistan in return for the aid workers’ freedom, although Seoul has said the group’s demands are “fluid and not unified”.

James Bays, Al Jazeera’s correspondent in Kabul, said: “A Taliban spokesman said that talks continue between tribal elders and a government team, but that these talks are not going well.

“That’s because some of the prisoners that the Taliban want released in return for the freedom of the hostages are in the hands of the Americans and that’s why the Afghan government can’t release them.

“But they are turning a blind eye so that dialogue can take place.”

The Afghan government has said little with Izmarai Basharri, an Afghan interior ministry spokesman, merely confirming that the government was “working on the case”.

All of the South Koreans being held by the Taliban are in bad health, a Taliban spokesman said.

Qari Yousef Ahmadi said: “I don’t know if the weather is not good for them or our food. The women hostages are crying. The men and women are worried about their future.”

In Seoul, a South Korean foreign ministry official, said officials were trying to get medicine and other items to them.

Ahmadi said the hostages were being held in small groups in different locations and were being fed bread, yogurt and rice.

The South Koreans were seized while travelling on the highway between Kabul and Kandahar on July 19 in Ghazni province about 140km south of Kabul.

One of the hostages made an emotional plea for help in a reported telephone interview with a US television network, allegedly conducted in the presence of her captors.

The plea came after the bullet-riddled body of the mission leader was dumped beside a road on Wednesday. The Taliban said they had killed him because talks with the Afghan government and South Korean officials had stalled.

South Korea named him as 42-year-old Bae Hyung-Kyu, head of the mostly female aid mission based at a Seoul church, which was reportedly in the country to provide free medical services.

On Saturday, a memorial service was held for Bae. His father, Ho-Joong, said that Hyung-Kyu could only rest in peace when the other hostages were released.

“With their release, my dead son will close his eyes comfortably,” he said.

Deadline to negotiate release of South Koreans extended until noon on Friday. 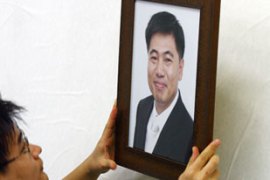 ‘Please send them back’

The families of some of the South Korean hostages talk to Al Jazeera.