The leaders of the anti-coup protest have said they plan to file assault charges against the Thai police.

However, the police themselves have also filed charges against six people that say were ringleaders of the protest.

The arrested suspects were charged with “causing chaos, obstructing the work of authorities, and damage of state property” a police spokesman told the Associated Press.

The clashes broke out after several thousand people demonstrated outside the Bangkok home of Prem Tinsulanonda, a former prime minister and army commander who is chief advisor to the Thai king

The protesters accused Prem – who is reported to have close ties with the leader of last year’s coup – of instigating Thaksin’s overthrow.

Despite warnings of arrest, the organisers of Sunday’s protest said they would continue to hold further demonstrations.

On Monday a smaller protest took place in central Bangkok, with video screens playing footage of the clashes the night before.

The protesters, who have labelled themselves the United Front of Democracy against Dictatorship, accused the police of provoking the violence on Prem’s orders.

“We condemn the actions last night. We will fight back,” Jakraphob Penkair, a protest organiser, told reporters. 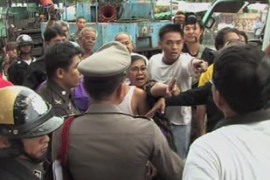 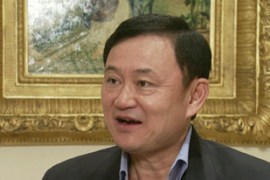 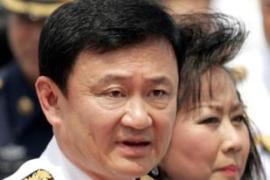 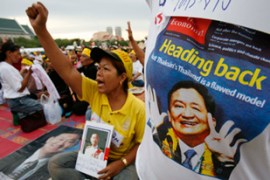