“We will call on the council to decide on early elections. We want elections because a democratic choice is the right for all the people. We won’t exclude anybody from having their say in a democratic way,” Abbas said.

In his speech, Abbas criticised Hamas’ takeover of Gaza last month, when it vanquished Fatah forces loyal to him.

The president repeated his charge that Hamas had carried out a coup against him.

He said: “Nothing can justify the crime of the coup they committed. [Hamas is] committing capital crimes, bloody crimes against our people every day, every minute, every hour.

“There will be no dialogue until they return Gaza to what it was before.”

Abbas also blamed Hamas for the plight of thousands of Palestinians who are stranded at the Rafah crossing between Egypt and Gaza.

He said his Palestinian authority had reached an agreement with Israel to run the crossing with European observers, but when Hamas overran the crossing, the observers had left and the crossing remained closed.

“What can we do now? They have closed the crossing. To operate the crossing we need the Europeans, and they have left,” Abbas said.

He said Hamas was preventing the stranded people from using an alternate route – a crossing where the borders of Israel, Egypt and Gaza meet – by firing rockets and forcing that crossing to remain closed as well.

In response to the comments, Sami Abu Zuhri, a Hamas spokesman in Gaza, blamed Abbas for the collapse of the Hamas-Fatah government.

Abu Zuhri also said the PCC had no authority to call elections.

He said: “It is not legitimate to issue such a recommendation. This council has expired and has no mandate and no authority.”

Abbas said he would call for a change in the electoral system, eliminating regional balloting.

The regional voting cost Fatah a number of seats in the 2006 election, when rival Fatah candidates faced each other and helped hand victory to Hamas.

Instead, Palestinians will vote for parties under a system of proportional representation.

The parliament would be divided among the parties in proportion to the votes they received.

Abbas also referred to the call by George Bush, the US president, for an international conference about Middle East peace later this year.

He said he told both Bush and Ehud Olmert, the Israeli prime minister, that core issues must be negotiated now.

Those would include the borders of a Palestinian state and solutions for the issues of Jerusalem and Palestinian refugees.

Abbas said he would restate the Palestinian demand for an independent state at the conference.

Israel has welcomed the idea of a conference but maintains that core issues cannot be discussed as long as Palestinian violence against Israel continues. 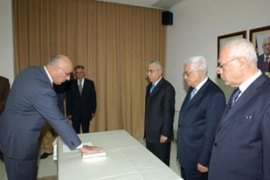