Ghazi was killed on Tuesday night after Pakistani forces laid siege to the mosque for more than a week. His body was being taken for burial in his home village in Punjab province, an interior ministry official said.

At least three fighters were killed overnight and several more, as well as members of the security forces were wounded in the morning clash.

Occasional explosions rang out from the complex as troops destroyed booby-traps and mines.
At least nine members of the security forces were killed and 29 wounded in the fighting.

Heavy security was still in place but a curfew in the neighbourhood for more than a week was lifted for a few hours in the afternoon.
‘400 shrouds’
Abdul Sattar Edhi, head of the private relief agency Edhi Foundation, said the army had asked him to prepare 400 white shrouds used for covering the dead.

Police said more than 100 armed tribesmen and religious students near Batagram, in northwest Pakistan, joined a protest over the storming of the mosque by temporarily blocking a road leading to China.

Another 500 Islamic school students in the eastern city of Multan blocked a main road and burned tyres, chanting “Down with Musharraf”.
The decision to storm the mosque followed a week-long siege and came after the government said efforts to negotiate a peaceful end had broken down.

Final death toll
Government spokesmen accused the Red Mosque fighters of holding up children and using them as human shields before and during Tuesday’s raid.
Although officials said about 30 children and 27 women had managed to escape during the fierce fighting, talks between the government and fighters suggested that hundreds had been inside.

That has raised fears that the final death toll from the military raid could rise significantly.

More than 80 people have been killed since street clashes erupted on July 3 between security forces and Red Mosque followers.

The mosque’s leaders had sought to impose strict Islamic law in the capital, including inciting students to abduct and “re-educate” alleged prostitutes.
‘Responsible’ decision
The United States has said it backs Pakistan’s “responsible” decision to storm the mosque.
Speaking in the US state of Ohio, George Bush, the US president, signalled his support for Pakistan’s government, praising the country’s president, Pervez Musharraf, as “a strong ally in the war against these extremists”.

The US embassy in Islamabad has warned its citizens in Pakistan to be on guard for the possibility of attacks by “terrorist elements” in the wake of the mosque raid.
Source : News Agencies 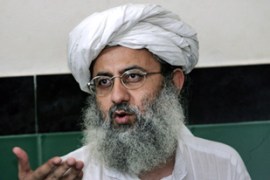 Army claims to have cleared up to 95 per cent of the mosque compound of fighters. 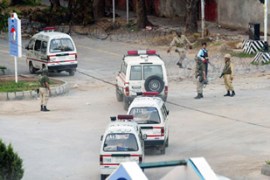