The unusually heavy sentence meted out to Zheng, 63, is being seen as an effort by the government to demonstrate its determination to address the country’s dire product safety record.

Zheng headed the State Food and Drug Administration (SFDA), which sets standards for food and drug safety, from 1998 until he was sacked in 2005.

China has been faced with mounting domestic and international pressure to overcome problems arising from sub-standard products, including exported food, fake drugs and other potentially toxic or dangerous products.

Yan Jiangyang, a spokeswoman for the SFDA, confirmed the execution at a press conference in Beijing.

“The few corrupt officials… are the shame of the whole system and their scandals have revealed some very serious problems,” she said.

“We should seriously reflect and learn lessons from these cases. We should step up our efforts to ensure food and drug safety, which is what we are doing now and what we will do in the future,” she said.

Yan said the SFDA was working to tighten its safety procedures and create a more transparent operating environment.

“Its foundation is weak so the supervision of food and drug safety is not easy.”

Under pressure from the government and a growing media outcry the SFDA has vowed to crack down on safety, and has closed factories where illegal chemicals or other problems were found.

Last week, the SFDA said almost 20 per cent of products made for consumption within China were found to be sub-standard in the first half of the year.

It said canned and preserved fruit and dried fish were the most problematic primarily because of excessive bacteria and additives.

The current raft of alerts over Chinese-made products began after dozens of deaths in Panama last year were blamed on contaminated medicine containing diethylene glycol, a chemical often used in anti-freeze.

Chinese-made toothpaste has also been banned in a handful of countries due to its content of diethylene glycol, although there have been no reports of health problems stemming from the product.

Earlier this year pet food containing Chinese wheat gluten tainted with the chemical melamine was blamed for the deaths of hundreds of pet dogs and cats in North America.

US authorities have since turned away or recalled toxic fish, juice containing unsafe colour additives and toy trains decorated with lead paint, all of which were made or produced in China.

In the latest domestic alert over product safety, Chinese media reported on Tuesday that more than half the water coolers used in Beijing were dispensing counterfeit branded water.

The water is either tap water or purified water from small suppliers put into the water jugs and sealed with bogus quality standard marks, the Beijing Times newspaper said in a lengthy report. 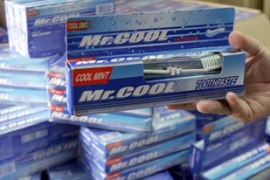