Washington has been negotiating to place 10 interceptors in Poland and a radar in another ex-Soviet satellite, the Czech Republic, as the European part of a global system to counter the threat of a nuclear attack from “rogue” states such as Iran.

A sceptical Russia sees the project as undermining its own security and Vladimir Putin, the Russian president, has threatened to revert to the Cold War practice of targeting Russian missiles on Europe if the plan goes ahead.

Upping the ante, Putin made a surprise offer on Thursday to let the United States use a Russian-controlled radar in Azerbaijan to detect any threats from the Middle East.

On Friday, he said the interceptors could be placed in southern Europe or Turkey and that Russia was happy to share intelligence picked up by the Azeri radar.

But neither Bush nor Kaczynski commented directly on the Russian offer, and reiterated that Russia had nothing to fear from the central European deployment of the shield.

“Neither the US or Polish plans are aimed against Russia. It [Russia] can feel safe from our side,” Kaczynski said.

Following their joint briefing, Bush took off on board Air Force One for Italy.

Earlier in the day, Dana Perino, the White House spokeswoman, said the United States would talk to all parties – Nato, Czech Republic, Poland and Russia.

“Everything is on the table,” she said. “We are going to continue talking to Russia. President Putin put forward a very substantive proposal.” 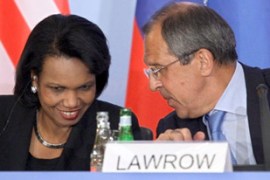 ‘Arms race’ warning over US shield