Quick adoption of the rules was needed, he said, “so that the court can move forward to provide the justice, for which the Cambodian people and humanity as a whole have been waiting for a long time”.

The rules are necessary before the trials for crimes against humanity and genocide can be convened.

If all goes well in the current meetings, the first trial could begin early next year.

Speaking on behalf of her UN-appointed colleagues, New Zealand judge Sylvia Cartwright expressed optimism that the long-awaited trial process would soon get underway.

“We know that if the internal rules are adopted in their present draft form, we have a foundation from which it may be possible to ensure a free, fair and transparent trial,” she said.

Led by Pol Pot, the group’s so-called Brother Number One, the Khmer Rouge are blamed for the deaths of about 1.7 million people through hunger, disease, overwork and execution.

Once the rules are agreed, prosecutors will be able to file initial cases against those they deem most responsible for the atrocities during the Khmer Rouge’s period in power from 1975 to 1979.

The trials are expected to take three years and cost $53 million, but many fear that unless agreement is reached quickly, the few aging defendants still alive could die before being brought to justice.

The tribunal was created last year after seven years of contentious negotiations between the United Nations and Cambodia.

Trials had been expected to start this year. But Cambodian and foreign judges spent the last six months bickering about the rules.

The setting of expensive legal fees for foreign lawyers wanting to take part in the tribunal was the latest obstacle, resolved only in April. 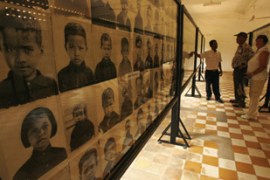 Resolution of dispute over legal fees clears the way for long-awaited trial.

It seems strange to describe the passing of a man known as “the Butcher” – the military chief of a movement that killed over one and a half million people – as a shame.

Ta Mok, the military chief of the Khmer Rouge, has died in Cambodia.