The molar perfectly matched a gap in the jaw of the mummy.

Hatshepsut was a female monarch who called herself a pharaoh, dressed like a man and wore a false beard.

She ruled during the 15th century BC, weilding more power than two other women of ancient Egypt, Cleopatra and Nefertiti.

However, when her rule ended, all traces of her disappeared, including her mummy.

Another mummy, which had been in the Egyptian museum for decades and was long believed to be the queen’s wet nurse Sitre-In, was initially investigated as possibly being Hatshepsut herself.

The mummy identified as Hatshepsut shows an obese woman, who died in her 50s, probably had diabetes and is also believed to have had liver cancer.

Her left hand is positioned against her chest, in a traditional sign of royalty in ancient Egypt.

Yehia Zakaria Gad, an Egyptian molecular geneticist who is on Hawass’ team, said DNA bone samples taken from the mummy’s hip bone and femur are being compared to the mummy of Hatshepsut’s grandmother, Amos Nefreteri.

Hawass has led the search for Hatshepsut for the past year, setting up a $5m DNA lab in the basement of the Cairo Museum with an international team of scientists.

The study was funded by the Discovery channel, which is to broadcast an exclusive documentary on it in July.

Peter Lovering from the channel’s production team said: “This is a fantastic story of an ancient Egyptian queen but also a real scientific discovery.”

Hatshepsut is believed to have stolen the throne from her young stepson, Thutmose III.

Her rule of about 21 years was the longest among ancient Egyptian queens, ending in 1453 BC.

Hatshepsut’s funeral temple is located in ancient Thebes, on the west bank of the Nile in today’s Luxor, a multi-collonaded sandstone temple built to serve as tribute to her power.

After Hatshepsut’s death her name was obliterated from the records in what is believed to have been her stepson’s revenge.

She was one of the most prolific builder pharaohs of ancient Egypt, commissioning hundreds of construction projects throughout both Upper and Lower Egypt.

Almost every major museum in the world today has a collection of Hatshepsut statuary. 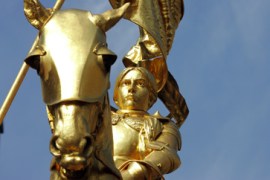 Joan of Arc ‘an Egyptian mummy’

Medieval French heroine’s remains turn out to be those of an Egyptian mummy.

A Japanese research team has found what they believe is a perfect mummy in an unrobbed Egyptian tomb believed to be more than 3500 years old.

Egypt plans to X-ray the mummy of Tutankhamun to find out what killed the king who ruled Egypt more than 3000 years ago and died in his teens.