“In recent days a group of controllers has insisted on obstructing the people’s right to come and go,” Pires said. “Brazil will not be the hostage of any professional category.”

Juniti Saito, a commander in the air force, who control Brazil’s air traffic control system, said the 14 controllers were a “negative influence” and would be transferred, but not fired.

The air force at first blamed the delays on problems with radar screens and a communications link failure on Tuesday.

Controllers then staged a work slowdown after two union leaders were disciplined for speaking to the media without authorisation, complaining that poor working conditions and inadequate training are putting the public at risk.

The protest caused at least 115 flight cancellations and 461 flight delays on Friday, creating long lines of tired and annoyed passengers at the airports in Rio de Janeiro and Sao Paulo.

The protest is the latest controversy surrounding air radar systems in South America.

The airport radar in Buenos Aires, the capital of Argentina has not worked properly since being struck by lightning in March, meaning jets must fly under manual control.

When an air control system failed in December, take-offs were suspended for hours at three major Brazilian airports. A congressional commission is investigating several reports of near-misses in the air.

Experts say the root of the problem lies with decades of insufficient investment in air traffic control systems coupled with explosive growth in air travel in South America fuelled by strong economic growth. 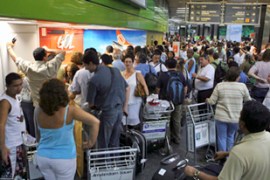 All flight departures were suspended on Friday after air traffic controller walkout.