He said he cleared several houses without incident and was taking a cigarette break when he noticed a group of Iraqi men looking at him suspiciously.
Along with three other marines, including squad leader Staff Sergeant Frank Wuterich, Sharratt went to look for the men.
‘Armed’

The troops went to one house where several women said the men were hiding in a neighbouring house, Sharratt told the court.

In that house, Sharratt said he saw an Iraqi point an AK-47 at him from across the hallway.
Sharratt’s machine gun jammed, so he pulled out his pistol and shot the man in the head.
“When the insurgent popped back out from behind the door, I shot him once in the head, and he fell backwards,” Sharratt said.
He said that he then heard another man loading a rifle in an adjoining bedroom.
“As I stepped into the doorway, to my front was another insurgent with his AK-47 waist level as though he had just completed racking it,” Sharratt read from his prepared statement.
“I immediately fired at his head and chest… After shooting him, I continued to shoot the other individuals in the room.”
Sharratt said Wuterich went into the room and fired at the men, too, after Sharratt ran out of ammunition and yelled “I’m out!”
Women and children
Prosecutors say Wuterich is responsible for the death of a fourth man in the room.

Sharratt’s account came at his Article 32 investigation, a hearing during which an investigating officer will review evidence to recommend whether Sharratt should be sent to a court martial.

Most of the 24 Iraqis were killed when the marine squad went house to house looking for fighters.
Among the dead were elderly people, and women and children who were killed in bed.
Wuterich and Lance Corporal Stephen Tatum are also charged with murder.
Four officers are charged with dereliction of duty for failing to investigate.
Source : News Agencies 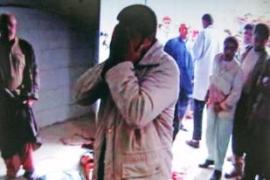