Cambodian and international judges have agreed rules for the long-delayed tribunal to try  leaders of the former Khmer Rouge regime.

Two survivors from the time and a former Khmer Rouge prison guard told Al Jazeera their memories of a brutal period in Cambodia’s history:

When the Khmer Rouge arrived in Phnom Penh on April 17, they moved citizens out of the city. They allowed me to rest one day because I had a miscarriage, and then they forced me to carry on walking.

I looked like an animal, walking along covered in blood. Frankly, we were like animals, but our food was worse than animals’.

Along the way I often saw dead bodies. I did not know what to do, how to escape, where to go.

The village where I arrived, Sambo village, had already been prepared. First they ordered us to make dykes in rice fields and later to build a big dam.

We worked using our hands. It was hard and when we did not finish they did not allow us to eat.

If a person didn’t work according to their orders they would kill us. They always said ‘keeping you is no gain and losing you is no loss’.

I felt frightened all day and every night.

They did not allow us to live together. My husband, mother and children went to work in different places.

We rarely met – only at Khmer Rouge festivals. Only then we knew our kids were still alive, and my husband. When we lived separately we did not know where they were.

During the regime those working got more and more sick and died. All of us were thin. No one was fat. If they were fat they were swollen and sick.

The guards were children, illiterate, between 15 and 16-years-old.

They killed the men after the dams were complete and especially before the rice harvest, they really killed. For example, if one family had 10 members, five members had to be killed.

I never dared hope I would survive. When we were liberated we felt that we had a new life.

What I remember most is the separation and the killing. 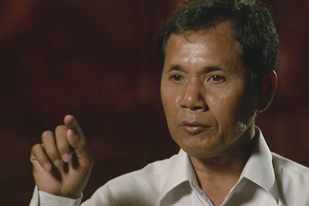 My name is Lon Him. I was a commerce student in Phnom Penh when I was removed and became a farm slave.

When I saw the Khmer Rouge for the first time, I seemed to feel happy because the war was ended and I could carry on my studies.

But my hope lasted only one day.

The next day they pointed guns at us and removed us from Phnom Penh. Some people who did not obey the order were shot instantly right in front of Ooma-Laum pagoda. I witnessed it with my own eyes.

In the village first they order us to work in a rice plantation. Sometimes they ordered us to carry rice plants about 5 km away. I carried rice sacks for 12 hours each day.

I was a human plough, without enough food to eat. We had banana tree pieces mixed with a little rice to cook porridge.

If we were lazy we would be badly treated. Some people were taken away, especially those who were literate and talkative.

The people who survived were those who kept their backgrounds hidden and personal information about knowledge, jobs and other things.

I dared not tell them which level of study I had got and what my job was.

I had one friend who studied with me at the faculty and he became the commune chief secretary and later when it was found that he had a higher education they took him away to be killed and they detained me for two days in order to investigate.

I said I never studied and just knew the guy when I was in the village, otherwise I was also dead.

The Khmer Rouge militia carried rifles but they were so small their guns were bigger than these young kids.

I saw about 10 places where people were lying dead, hit on the back of the head. Some of the killing places were not seen. For example in Nor-ea pagoda, only the smell hit you when we walked nearby.

My father could do nothing because he was too old and by June 1976 he died.

He was sick and we did not have medicine to treat him – we couldn’t find anything except tree bark. He had diarrhoea. He just lay on a mat.

I still feel angry because eight of my brothers and sisters died, four before the Khmer Rouge, four after. They considered us as animals but we are human beings.

The Khmer Rouge are human beings but they have no morals at all.

The world should help find justice. For the trial I don’t know much about it but it must bring justice because the dead people, those who lost family members and the poor survivors, did not know why the deaths happened. So it needs to be considered by the world.

In 1976, my military commander took me to the prison. They allowed me to eat and sleep there.

After staying there a few days doing nothing, I was ordered to be a guard outside of the prison, stationed at a street away from the actual prison.

There were nine people staying with me. I don’t know what the prisoners had done, why they were sent in and my duty was just guarding – but only the outside.

I never went inside the prison so I never tortured prisoners.

But after a period, one day there were some executions and one prisoner remained. Duch [the head of the infamous S-21 interrogation and torture centre in Phnom Penh] asked me ‘are you committed?’

To become a cadre, you have to be committed and I said ‘yes, I am committed’.

Then I took an iron bar from someone and hit the prisoner on the neck from behind. I dropped the bar and the other executioner put the bar in the grave.

I couldn’t refuse to do it so when he asked me like that I had to do it. If I refused he would say that I am not committed. Because in every meeting they always said we had to be dedicated to the fight against the enemy. If anyone is not dedicated he or she was the enemy of the revolution.

So everyone was ordered to spy on each other and if they saw any mistakes he or she must denounce them.

I had no intention to mistreat anyone because each of us wants to live , even I wanted to live but the order we could not refuse. We had to follow, if we didn’t we would be arrested.

I was afraid every day and every night.

I didn’t intend to be there because they made me go there. I could not escape it.

If I had run I did not know where to go, so I decide to stay and wait until I died as well.

If the high ranks ordered it, we had to follow them in order to survive. I didn’t do anything wrong because I never asked to go there. They sent me.