In the dead of night, a half moon shining above, 50 men from the Sri Lankan infantry inch their way along a mud track softened by a brief downpour of rain.

We moved with them, passing within a few hundred metres of Tamil Tiger positions.

No one spoke, wary of the hit and run expertise of one of the deadliest guerrilla forces in the world.

The other concern was mines and the fear that your next step could be your last.

Through the night the sound of artillery and mortar fire echoed through the dark as the army pounded Tiger positions around Thoppigala, near Batticoloa in the east of the country.

Sri Lanka’s military says it is making significant inroads against the Tigers in the east of the country, although the rebels remain strong in the north.

The target of this operation: A bridge which the Tigers had specially constructed for the movement of supplies.

To cut this artery would seriously effect their movement and capability in the east, the army told us

It took two days to get within sight of the bridge. Sappers cleared a way through the minefields and the final assault began.

The army fired grenades and hit their enemy with small calibre and heavy machinegun fire. We moved into the area.

The Tigers responded with gunfire and one mortar round which fell within 40 metres of us. No one was hurt.

Soldiers opened up with constant fire. It came from all around us as infantrymen joined in the fight. They crouched behind buildings, disused machinery and deserted Tiger positions.

Suddenly there was a kind of panic – the Tigers had flanked us and began firing.

Cameraman Justin Okines and I sprinted for cover.

Now firing was coming from two directions – typical Tiger tactics, I was told.

I found no comfort in that.

Commanders were unsure of the outcome. “You must go back,” one said. “It is too dangerous.”

We left quickly being taken out of the fire zone on the back of motorbikes. I spoke to the camera about what had happened.

It was only later when I played it back that I heard the fear and exhilaration in my voice.

The flanking movement, we were informed, was to enable the Tigers to recover their wounded and dead and retreat back into the jungle.

The bridge was taken but not secure. The Tigers laid down fire to keep the soldiers away.

They had blown the bridge up before they fled but army engineers said it would take only a week to repair.

In the captured position bullet casings and flip-flops were the only signs of the guerillas presence; their bunker made up of sacks of rice donated by humanitarian organisations.

Mindful of criticism from human rights groups, officers were keen to stress that, to their knowledge, no civilians had been hurt in the operation.

Most were worried about being identified because of being traced by Tiger hit squads.

The bridge was one just objective for the Sri Lankan army. There are many more in this area. 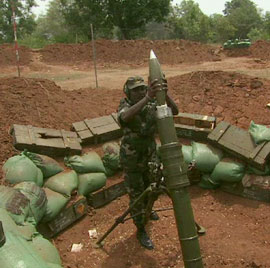 Officials stressed that no civilians
were hurt in the operation

After 10 months of fighting in the east we were told that the Tiger strength in the region is down to about 500 and they have been pushed back to an area of around 700 square kilometres.

The military is happy because they say for the first time the government is giving them a clear strategy and the backing that will allow them to seriously weaken the Tamil Tigers.

The Tigers though are not finished. They have been wounded, but they are still dangerous.

They control a huge swathe of the north of the country and can still wreak havoc with bombings and suicide attacks, even in the supposedly secure areas of the capital.

Everyone agrees a solution to this terrible conflict can only be achieved through negotiation, not by fighting.

“We need to sort this out now,” a young major told me. “We can’t leave it for the next generation.” 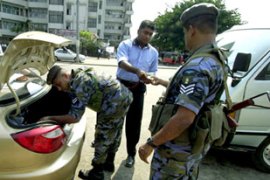 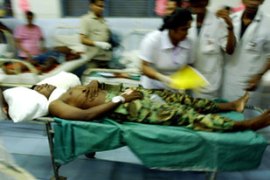 Colombo on alert after bomb blasts

Multiple attacks over the past 24 hours kills 11 people and wounds dozens more. 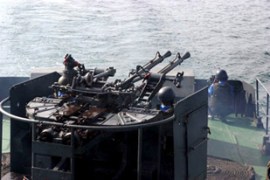 Tamil Tigers claim killing 35 sailors in attack on naval base.