A Lebanese military source said the army blasted the camp at Nahr al-Bared with tank fire.
At least three members of Fatah al-Islam were killed in central Tripoli after the army stormed a building in which they were hiding.
More than 40 wounded people contacted Al Jazeera saying they were not able to leave their homes to reach hospitals.
Witnesses reported hearing exchanges of fire from assault rifles and machine guns, as well as rocket explosions.
The death toll could rise as the Lebanese authorities are unable to enter Palestinian camps in observance of a 38-year-old deal.
Warning

In a statement, he said: “The blows dealt by Fatah al-Islam against the Lebanese army are a premeditated crime and a dangerous attempt to destabilise [Lebanon]”.

He called on the people of Lebanon, which has been battling political chaos for months, to “join ranks behind the army and Lebanese security forces.”

The authenticity of the groups’ statement could not be immediately verified but its language was similar to previous statements from the group.

“We warn the Lebanese army of the consequences of continuing the provocative acts against our mujahidin who will open the gates of fire… against [the army] and against the whole of Lebanon.”

However, it has tightened its grip around the camp since the authorities charged members of the group with carrying out two bus bombings in a Christian area near Beirut that killed three civilians in February.

The Lebanese army has also stepped up security in the area surrounding Ain al-Hilweh refugee camp in southern Lebanon.

Fatah al-Islam was formed last year by fighters who broke off from the pro-Syrian Fatah-Intifada group.

Ahmad Fatfat, a Lebanese cabinet minister, said Sunday’s violence was part of efforts to sabotage the setting up of an international tribunal to try suspects in the 2005 assassination of Rafiq al-Hariri, a former prime minister.

While a UN inquiry into the Hariri killing has not yet concluded, interim reports have implicated Syria and Lebanese officials.

“There is someone trying to create security chaos to say to world public opinion: ‘Look, if the tribunal is established, there will be security trouble in Lebanon‘,” Fatfat said.

Syria and Fatah al-Islam deny having any relationship. 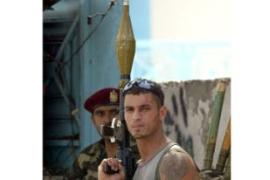