Two days earlier a suicide bomber struck a police station in a Kurdish neighborhood in Kirkuk, killing 15 people, including a baby girl and a US soldier, and wounding nearly 200.
The attacks come after Iraqi and US military commanders said that armed groups were shifting the focus of their attacks away from Baghdad, where thousands of US and Iraqi troops have taken to the streets to tackle sectarian fighting.
Ali al-Dabbagh, an Iraqi government spokesman, said on Monday that “terrorist groups have now taken root outside of Baghdad to commit terrorist attacks … and this represents a challenge to the government”.
Violence has increased recently in Kirkuk, which is about 290km north of Baghdad.
Ethnic and religious tensions increased after the government adopted a plan to relocate thousands of Arabs who were moved to Kirkuk, which sits on a third of Iraq’s oil resources, decades ago as part of a campaign by Saddam Hussein, Iraq’s former leader, to displace the Kurds.
Longstanding Kurdish demands for the city to be incorporated into their autonomous region in northern Iraq are due to be put to a referendum before the end of the year.
Last week the Iraqi cabinet agreed to give Arab families 20 million dinars ($15,000) each and a piece of land if they voluntarily returned to their original towns.
Meanwhile, south of Baghdad on Wednesday, armed men manning a fake checkpoint kidnapped passengers travelling in six minibuses and a car,  an official in the police chief’s office in the town of Hilla said.
The official said it was not clear how many people had been seized. Motorists reported seeing the kidnap victims being taken in the direction of Latifiya.
Source : News Agencies 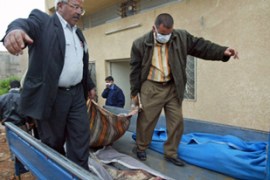 Police say 20 children playing at a nearby school are among the casualties. 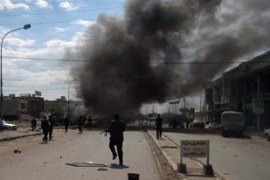 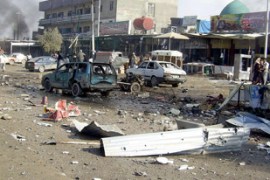 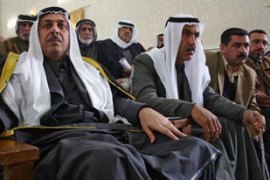 Thousands of Arabs who moved to Kirkuk are set to be returned to their original towns.