Negroponte is currently in Sudan pressing Khartoum to accept a hybrid peacekeeping force of UN and African Union forces to stem violence that has steadily escalated since the Darfur conflict erupted in 2003.

The UN estimates that at least 200,000 people have been killed in the conflict which threatens to involve neighbouring Chad and which the under-equipped 7,000 troops of the African Union have been unable to contain.

Negroponte’s visit comes after the United States held off on a decision to impose unilateral sanctions against Sudan to give Ban Ki-moon, the UN secretary-general, a last chance to persuade Khartoum to allow UN peacekeepers into Darfur.

Ban on April 2 asked for an additional two to four weeks to pressure Sudan’s opposition to the UN’s planned deployment of a  joint force of some 20,000 troops to Darfur before turning to  sanctions.

Khartoum, whose troops and allied Janjawid militia have been blamed by aid agencies for widespread killing, rapes and burning of villages in Darfur, has opposed any UN military force deployment, other than logistical.

On Monday after talks involving UN, AU and Sudanese government officials in Addis Ababa over a three-stage plan for international peacekeeping in Darfur, Sudan agreed to allow the UN to start sending reinforcements to the AU troops.

Ban said he would hold key talks on Monday and Tuesday with Alpha Oumar Konare, the AU Commission chairman, on the final phase of the plan expected to culminate in the deployment of a 20,000-strong joint UN-AU force in Darfur. 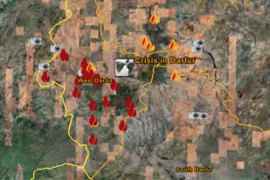 Google Earth annotates its Sudan maps with details of violence in the Darfur region. 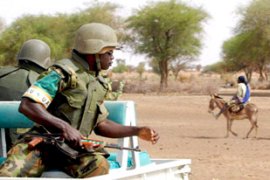 More than 3,000 soldiers and police, as well as equipment, to boost African Union force. 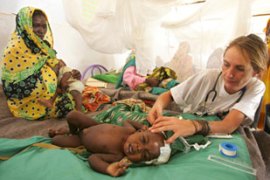