‘Step forward’
Harry Reid, the most senior senate Democrat, said: “Today was a significant step forward in our efforts to change course in Iraq and makes America more secure.”

He said the result was a pointed message to Bush that the time had come for a radical policy shift in Iraq, beginning with the redeployment of US troops.

He said: “With this vote, the senate is giving our troops the resources they need in combat – including a strategy in Iraq worthy of their sacrifices.
“The president must change course and this legislation gives him a chance to do that.”
The proposed Republican amendment came on the second day of a senate debate over sending an additional $122bn for the wars in Iraq and Afghanistan.
Bush veto
A vote on the entire supplemental spending bill is expected later in the week.
Bush has promised to veto any legislation with dates for withdrawing from Iraq, including a measure passed by the US House of Representatives last week.
The White House said in a statement that Bush was “disappointed that the senate continues down a path with a bill that he will veto and has no chance of becoming law”.
It also said: “In the two weeks since the senate defeated a similar proposal, General [David] Petraeus reports encouraging signs are already emerging.
“The senate, which unanimously confirmed the general for this mission, needs to support him by providing our troops the funding they need – not by mandating failure.”
Popular disgust
During Tuesday’s debate Democrats said popular disgust with the course of events in Iraq was what prompted many US voters to choose them over Bush’s Republican party in the November 2006 election.

They said that with deadly attacks virtually a daily fact of life in Iraq, it is time to accelerate moves to withdraw US forces.

Carl Levin, the leading Democrat on the senate Armed Services Committee, said:
“Nothing else has been successful in convincing the Iraqis that they have to take responsibility for their own country, and that they must make the political compromises that are necessary to end the sectarian violence and defeat the insurgency in Iraq.
“Only when the Iraqis realise that the mission of US forces in Iraq is changing and that we are going to reduce the number of US forces in Iraq, will they realise that we cannot save them from themselves.
“[Iraqis] need to act to meet the commitments they made to us and to themselves.”
Disruptions
The language of the bill tying troop withdrawal to increased funding is nearly identical to the wording of a bill that failed in the senate two weeks ago.

That prompted senate Republicans to accuse the Democrats of needlessly holding up funding to the troops to make a political point.

“We need to be speeding this funding to our troops rather than slowing it down by returning to a debate already settled by the senate,” Republican senator Thad Cochran said as he introduced his amendment on Monday.
Last week the US House of Representatives narrowly passed its own $124bn version of the spending bill for the wars in Iraq and Afghanistan, including a firm deadline for getting US troops out of Iraq by August 31, 2008.
On Saturday, Bush said in his weekly radio address that if congress did not approve a cash infusion for Iraq and Afghanistan by April 15, the forces in both countries “will face significant disruptions”.
Source : News Agencies 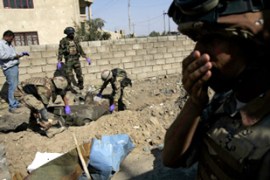 Tal Afar, on the Syria border, comes under attack for the second time in three days. 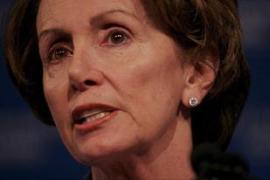 House of Representatives backs withdrawing US troops from Iraq by September 2008.