“We are not yet at final status negotiations. These are initial discussions to build confidence between parties,” she added.

The US secretary of state said she would ocassionally take part in the meetings.

Lieutenant general Keith Dayton, Rice’s envoy, will try to set benchmarks with the Israelis and Palestinians, for stopping rocket fire from Gaza and improving the movement of Palestinian travellers and cargo at Israeli-controlled crossings.

Saeb Erekat, the senior Palestinian negotiator, said Rice had “managed to keep the door open between us and Israel”.

While Israel had tried to limit discussions to humanitarian and security issues, he said, Rice ensured that talks would include a “political horizon,” if not a final status deal.

David Baker, an official in Olmert’s office, said: “The prime minister is interested in keeping an open line of dialogue with the Palestinian Authority chairman on humanitarian and security-related issues and has met with him twice in the last month.”

Olmert had once called Abbas a “partner for peace” but after the formation the Hamas-Fatah coalition, he said he would limit talks with the Palestinian president to humanitarian or similar immediate concerns.

Rice said that the peace process had been made “more complex” by the presence of Hamas, which refuses to recognise Israel and renounce violence, in the Palestinian unity government which was sworn in last week.

Rice held three days of meetings with Israeli, Palestinian and Jordanian leaders ahead of an Arab summit in Saudi Arabia which plans to revive a 2002 peace plan.

“The Arab states must being reaching out to Israel … to show Israel that they accept its place in the Middle East,” Rice said.

The Arab proposal calls on Israel to withdraw from all territories it occupied during the 1967 war, in exchange for recognition by the Arab world.

“I think that the Arab states would argue that they have already reached out in a very significant way and that the iniative that was put in 2002 was quite clear,” Jacky Rowland, Al Jazeera’s correspondent in Jerusalem, said.

“It was the Arab states saying that in principle they were ready to fully recognise Israel and fully estabish relations with Israel providing certain conditions were met.

“From the Israeli point of view, they are looking for some changes, some moderation to the proposals set out in that Saudi document.” 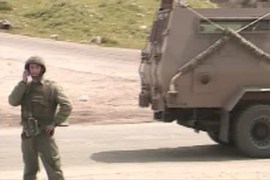 Rice in talks with Jordan king

She also met Mahmoud Abbas in Amman and will travel to Jerusalem to meet Ehud Olmert. 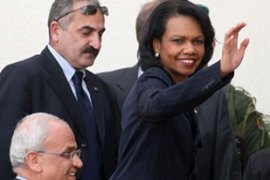 Condoleezza Rice tells Israelis and Palestinians to have “a destination in mind”. 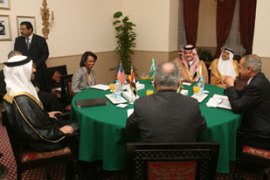 US secretary of state says reconciliation with Israel would help the Palestinians. 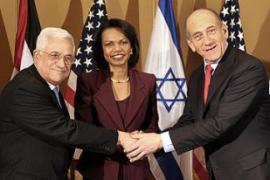 US secretary of state begins four-day trip to the Middle East.