At one point, officials had said there were 106 confirmed deaths, but later revised the figure without explanation.

Accidents in Russia’s mines are frequent but the Ulyanovskaya complex was opened only in 2002 and inaugurated on the 50th birthday of Vladimir Putin, the Russian president.
Modern mine

The mine, operated by the firm Yuzhkuzbassugol which owns a dozen other mines in the region, was said by officials to be equipped with some of the most modern safety equipment available in the industry and was a showpiece for a stock market debut planned for this year.

The explosion occurred as most of the mine’s managers were underground accompanying a visiting British auditor reported to be inspecting the facility in connection with the planned flotation.

Aman Tuleyev, governor of Kemerovo, said: “Practically the whole of the management of the company died in the accident.”

He said 20 members of the mine’s management team were killed in the explosion and ensuing fire, including the facility’s chief engineer and chief mechanic. Tuleyev said the mine’s director was spared as he was on holiday.

British mining consultancy IMC confirmed that one of its employees, Ian Robertson, was in the mine at the time of the blast but could not comment on what had happened to him.

Guards barred most journalists from entering the mine complex. Only reporters from state-controlled television channels were allowed in.

Emergency ministry officials arranged for relatives to wait at a nearby hotel. Local authorities declared three days of mourning, cancelling entertainment events and flying flags at half mast.

Authorities believed that a failure to follow safety rules was the most likely cause of the accident.

Putin dispatched Sergei Shoigu, Russia‘s emergencies minister, to oversee the rescue operation at the mine.

About 3,500km east of Moscow, the mine is at the heart of Siberia’s Kuznetsk basin, or Kuzbass, which holds some of the biggest coal reserves in the world. 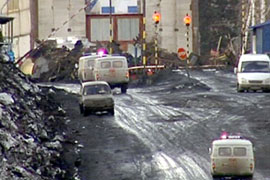 An estimated 203 people were working at the mine when the blast occurred. Officials said some miners had escaped.

Mikhail Fradkov, the Russian prime minister, called for tougher safety rules at coal mines. The Kommersant daily said it was Russia‘s worst mining accident since the fall of the Soviet Union in 1991.

Russian miners say safety rules are frequently broken in coal mines, some of which date from Josef Stalin’s mass industrialisation drive or even earlier.

On December 2, 1997, 67 miners were killed by a methane gas explosion, in a mine in the same region. Five weeks after that incident, 27 miners died in a mine explosion in Vorkuta in northern Russia.

Authorities said each victim’s family would receive compensation totalling a million rubles (about $37,000). 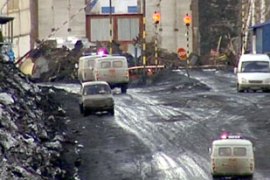 Toll rises in Russian mine blast

At least 200 miners were working underground when methane gas ignited.