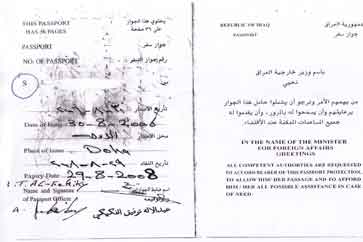 Hundreds of thousands of Iraqi expatriates have been left stranded after their passports were declared invalid.

The decision to declare some passports issued by the government of Saddam Hussein and after the US-led invasion of Iraq in 2003, has caused problems for Iraqis around the world.

The situation has been made more difficult because the first set of replacement passports have also been declared invalid and the new, legal version has not been sent to Iraq’s consulates.

These were to be replaced by a new document, carrying a letter ‘G’, and would be the only officially recognised travel document, but these never reached Iraq’s consulates abroad.

Iraqi expatriates are grateful to be outside their war-torn country, and away from death squads, but they now find themselves unable to travel freely.

Thousands of Iraqis are stranded and are being denied access to the US, UK, and Canada, because they are either carrying S-series passports, or old but valid Iraqi passports issued under Saddam.

The three countries host Iraqis who either acquired passports, became refugees, or who hold residency permits; the UK is estimated to be home to 250,000 expatriates, the US and Canada hundreds of thousands more.

Iraqi consulates are still issuing the S-type passports despite the fact that the Iraqi authorities cancelled it in 2005.

Yasir al-Muaiad, the diplomatic attaché at the Iraqi embassy in Doha, Qatar, said he did not expect the problem to be solved in the near future.

He said: “The new passports will be sent first to the Arab countries which host large Iraqi communities, and the quantity is not expected to be much in the beginning. In Jordan, for example, they will start to issue 10 passports a week only.”

Walid Khalid, an Iraqi journalist in Baghdad, says the G-series is being issued in Baghdad.

He said: “The G-type passport is available in Baghdad, people are getting it every day. We do not know why it is not being supplied to our embassies abroad.”

The problem became more complicated when Jordan became the first Arab country to join the US, UK and Canada in rejecting the S-series passport.

Al-Muaiad said: “Jordanian immigration authorities do not have instructions yet to reject the S-type passports, but we received information that they have denied lately many Iraqi nationals from entering Jordan alleging they were carrying the S-type passports. But we think they are just picking up on Iraqis,” he said.

The Iraqi government has sent a senior interior ministry official to try to convince the Jordanian authorities to cancel its decision.

Amal al-Rubei, a retired Iraqi teacher, 56, has been living in Jordan since 2003, but she is unable to visit her son in Britain.

She said: “I have a family in London, I need to go the UK, my son is expecting his first baby, and I also need to do some medical check-ups.

“The British embassy does not recognise my S-type passport. They told me that they have nothing to do with it, it is the Iraqi authorities who told them not to acknowledge the S-type passport.”

Some Iraqis are risking the dangerous journey to Baghdad simply to get a valid passport.

Another Iraqi expatriate who did not want to be named said he feared that this problem might affect his business.

He said: “My work requires travelling all over the world. I got my S-type passport from our embassy, which means I will have to say ‘No’ to assignments in UK and US. We also do not know who will join these countries in the future, the list might get longer. I am sure this will affect my job.”

Iraqis living in countries that are now rejecting the S-type say they fear that their residency permits will not be renewed.

Fawzia Abbas, an Iraqi businesswoman in Jordan, said: “I hope the latest decision would not affect those who hold legal residency in the country, otherwise we would not be able to renew our residency permits. I am really worried.”