“Congress and the American people will continue to support and protect the members of the United States Armed Forces who are serving or who have served bravely and honourably in Iraq,” the resolution says.
“Congress disapproves of the decision of president George W Bush announced on January 10, 2007, to deploy more than 20,000 additional United States combat troops to Iraq.”
‘Full day’
Bush said he was not planning to watch the House debate the resolution.

“I’ve got a full day tomorrow … I already know what the debate is,” he told an interviewer on C-Span television.

“I hear a lot of opinions. And a lot of people don’t believe we can succeed in Iraq and, therefore, I presume, want to get out. That would be a disastrous course as far as I’m concerned.”
Republicans have conceded they are likely to lose the vote on the resolution and have said they expect some of their members to defect and support it.
They said on Monday that it was the first step towards halting spending on soldiers, a move that is considered anathema to many legislators.
“After their resolution passes, Democrats will begin moving legislation to systematically cut off funding for America’s troops,” declared a statement from John Boehner, the house’s Republican leader.
Democratic leaders have denied they will cut funding to troops deployed in Iraq or Afghanistan.
Source: News Agencies 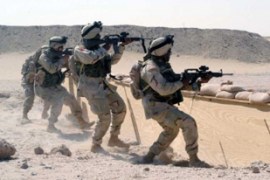 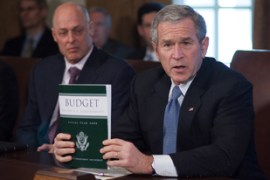 Democrats say president’s proposed budget would take the US into a “chasm of debt”.