Police said on Monday that 40 people were killed in Nairobi and 53 in Kisumu, the country’s third city and a bastion of defeated opposition challenger Raila Odinga.

Four bodies were discovered in the capital’s Mathare slum, seven were killed in Nakuru, provincial capital of the Rift Valley. Further clashes between rival supporters in a village near Kapsabet also left four dead, police said.

Smoke rose over the slum of Kibera as truckloads of heavily armed police were brought in to try to contain demonstrators .

Andrew Simmons, Al Jazeera’s Africa bureau chief, reported that Odinga had cancelled a gathering in central Nairobi on Monday that had been billed as a parallel swearing-in ceremony for “the people’s president”. The meeting had been banned by the authorities.

He is now calling for a peaceful mass protest on January 3.

The Kenyan authorities said that anyone attempting to join the demonstration would face arrest and in the slums police were operating a shoot-on-sight policy. Massive security deployments could be seen across the city.

Simmons said: “Kenya is in shock today. Poor people are suffering the most. Not just those who are protesting, but those who are living in those slum areas cordoned off by the security forces. 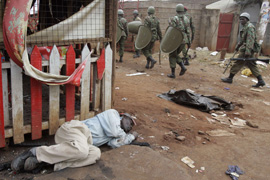 A man lies wounded in a Nairobi street
[Reuters]

“Here in the capital, it’s extremely quiet. It is like a ghost town because of the clampdown.”

Mutuma Rutere, a member of the Kenya Human Rights Commission, described the depressing situation in Kenya a crisis.

“One of the things that we should emphasise at this point is not the divide, but the unity of the Kenyans,” he told Al Jazeera.

Samuel Kivuitu, the chairman of the electoral commission, had announced on Sunday that Kibaki won with 4,584,721 votes against Odinga’s 4,352,993 votes.

Kibera was one of the first areas to erupt into violence on Sunday when the electoral commission announced the result. Odinga had led in pre-election opinion polls and in early media tallies for Thursday’s vote.

Within an hour of the results being announced by the electoral commission, Kibaki, 76, was sworn in for a second five-year term.

Almost immediately men carrying rocks, machetes and sticks could be seen on the streets as smoke rose above Nairobi’s largest slum, home to one million people.

The Kenyan government has suspended live radio and television news and Kenya Airways has said flights in and out of Kisumu have been suspended due to a fuel shortage.

The European Union’s team of election observers said the country’s electoral commission had failed to ensure the credibility of the vote.

“We believe that, at this time, the ECK (Electoral Commission of Kenya), despite the best efforts of its chairman, has not succeeded in establishing the credibility of the tallying process to the satisfaction of all parties and candidates,” Alexander Graf Lambsdorff, the chief EU observer, said in a statement. 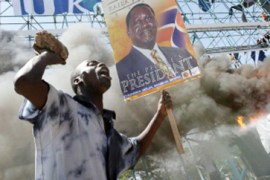 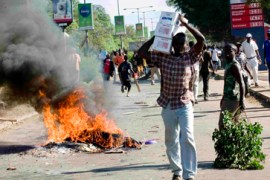 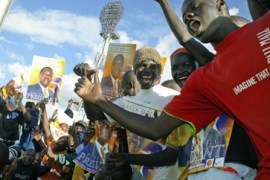 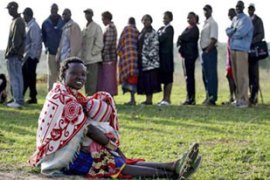