Fighting began in 1975 when Spain, the former colonial ruler, pulled out.
Morocco claims the region, but the Polisario, backed by Algeria, have been fighting for its separation. The fighting ended in 1991 with a UN-negotiated ceasefire.
UN-sponsored talks
The upcoming UN-brokered negotiations between the Polisario and the Moroccan government, set to begin on January 7,  are to be held in the US.
But earlier this year, two rounds of negotiations saw little progress towards resolving the 32-year-old dispute.
In a statement, Polisario representatives called the upcoming third round of talks a “precious occasion”, saying they hoped Morocco would seize it, APS reported.
“Otherwise, the Moroccan government will have to fully accept the consequences which will result from the failure of negotiations – notably the return to military hostilities,” the statement said.
In its statement, the group also called on the Moroccan government to free Saharawi political prisoners and “shed the light on the fate of more than 500 missing civilians”, APS reported.
The statement urged Spain to “assume its historic, moral and legal responsibilities” and press for the region’s independence.
Source: News Agencies 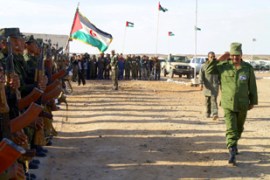 Morocco says the group’s staging of a congress in Tifariti breaches 1991 ceasefire.

Polisario will put the proposal to prepare for war to a vote at a congress.