Putin said: “According to the information we have, once again this was done at the advice of the US state department, and we will take this into account in our relations with that country.”
The OSCE election monitoring office said on 16 November that it would not send a mission to observe the vote, saying Moscow had not issued visas in time and created other obstacles.
Watchdog’s rebuttal
The OSCE quickly dismissed Russia’s claim through its election-monitoring arm, the Warsaw-based Office for Democratic  Institutions and Human Rights (ODIHR).
Urdur Gunnarsdottir, spokeswoman for ODIHR, said on Monday: “I think that Mr Putin has been misinformed.
“Our decision not to observe was based on the fact that we had not received any visas, despite assurances that we would.
Putin said the refusal to send observers was aimed at casting doubt over the legitimacy of the vote.
The comments reflect growing tensions in Moscow’s relations with Washington.
Russia drew sharp criticism from the US after the weekend when about 200 anti-Putin demonstrators including Garry Kasparov, the opposition politician, were arrested.
Kasparov sentenced
Kasparov was sentenced to five days in prison. Gordon Johndroe, a White House spokesman, said that Washington was “concerned by the aggressive tactics used by Russian authorities against opposition protesters”.
Putin’s comments come in the final days of campaigning for parliamentary polls which take place this Sunday.
The president, who must stand down next March, appeared to send a warning to the US to stay away from the December 2 vote.
United Russia, the party that Putin is standing for as a candidate despite not being a member, is forecast to win and secure Putin’s grip on power.
Opinion polls indicate the party will win at least 60 per cent of the vote.
Source: News Agencies 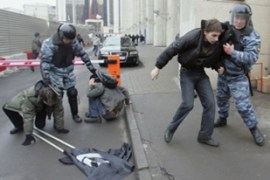 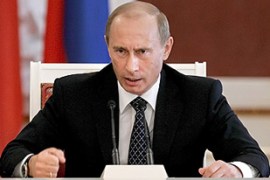 Putin says Russian conerns over missile shield are “being listened to” in US. 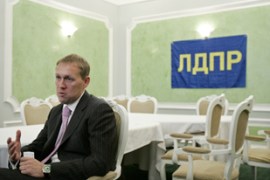 Russian suspect in Alexander Litvinenko murder says case against him has collapsed.