Marie-Anne MacRae, spokeswoman for GAP, a Canadian tour company which had chartered the Explorer, said: “Their families have been contacted and they have been able to contact their families. They’re all in good spirits.
“We’re going to work out arrangements for flying them back home.”
She said on Saturday the passengers and crew spent three to four hours on lifeboats before they were rescued by the Nordnorge, a Norwegian cruise ship and taken to nearby Chilean and Uruguayan military bases in  Antarctica.
Growing demand

Arnvid Hansen, the ship’s captain, said: “They are in good condition. There is no hypothermia, they all have food and clothes. Everything is OK.”

The Explorer usually made two-week cruises around the Antarctic at a cost of about $8,000 a cabin.

Smaller than most cruise ships, it was able to enter narrower bays off the continent.

The Lloyds List maritime publication said the Explorer had five  “deficiencies” at its last inspection, including problems with a watertight door.
The ship, which was built in 1969, also had lifeboat maintenance  problems and missing search and rescue plans, according to a report  on Lloyds’ website.
Ship ‘deficient’
Watertight doors were described as “not as required,” and the fire safety measures were also criticised in an inspection by Britain’s Maritime and Coastguard Agency in May, it said.
Chilean port inspectors also found six deficiencies during an inspection in Puerto Natales in March, including two related to navigation systems, it said.
The passengers were from Australia, Belgium, Britain, Canada, China, Denmark, Holland, France, Germany, Hong Kong, Ireland, Japan,  Switzerland and the United States.
Cruise ships regularly take passengers to the remote region to view icebergs and other Antarctic natural features at this time of year when weather is relatively good and the average temperature about minus  five degrees Celsius.
Cruise trip travel has grown in Antarctica in recent years and Pedro Tuhay, of the Argentine coastguard, told local radio that 52 cruises were expected at the southern port of Ushuaia during this year’s peak season from October to April.
Source: News Agencies 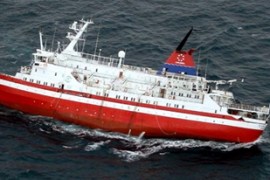 Rescuers save 150 in ship drama

Cruise liner sinking after being holed in Antarctic Ocean.