With the decision to call parliamentary elections on November 24, John Howard, the Australian prime minister, took a considerable political gamble.

Howard is already Australia’s second-longest serving prime minister, having been in office since 1996 when he defeated Paul Keating’s Labor government.

If his gamble pays off and he is elected, he would be entering his final term, having already said he will retire within three years if successfully returned to office.

However, this election could prove his toughest yet. He faces a popular opposition candidate, former diplomat and fluent Mandarin speaker Kevin Rudd, a younger politician strongly opposed to the war in Iraq who has pledged to withdraw Australian troops, sign the Kyoto treaty and instigate wide-ranging health and education reforms.

And Howard’s Liberal-National party coalition is trailing badly in national polls, with Howard himself concerned enough to acknowledge on Sunday that he was “facing my day of accountability”.

Nonetheless, the 68-year-old veteran politician’s long career shows he is not a candidate to be easily dismissed.

Howard was born in Sydney, Australia, on 26 July 1939, one of four sons whose mother was an office worker and whose father ran a petrol station in the city.

After studying law at the University of Sydney, Howard became a solicitor. He had already joined Australia’s conservative Liberal party at the age of 18 and served as president of the party’s youth organisation.

In 1971 he married his wife, Lynette, with whom he has three children.

He was elected into public office in 1974, after successfully running as a member of parliament for the suburban seat of Bennelong, which he has held ever since.

Following his success in Bennelong, Howard swiftly rose up the ranks of his party, culminating in his election as party leader in 1985 – and hence leader of the opposition against Keating’s Labor party.

Howard lost the leadership position once – to Andrew Peacock in 1989 – before regaining it in 1995. He would not lose it again.

After 11 years, Australians tired of their Labor government and Howard took his Liberal-National coalition to emphatic victory in 1996. His coalition has since won a further three elections, in 1998, 2001 and 2004.

Howard’s long tenure in power has not been without controversy, in particular over his decision to deploy 1,500 Australian troops to support the war in Iraq despite widespread public opposition – although there has not been a single fatality among the soldiers.

A staunch ally of George Bush, the US president, Howard said on Sunday that to withdraw the troops would not be in Australia’s national interest and would be “perceived as a Western defeat”.

Crucially, should Howard’s government fall, he will become the latest in a line of leaders from the so-called “coalition of the willing” in Iraq who have lost office, including former prime ministers Tony Blair of Britain, Jose Maria Aznar of Spain, Silvio Berlusconi of Italy and Aleksander Kwasniewski, Poland’s president.

Howard is also hoping his economic record will enable him to pull off a fifth victory – unemployment is at its lowest in 33 years in the nation and the economy is booming.

However, controversial labour laws introduced by Howard that made it easier to hire and fire workers have proved unpopular with younger voters and successive interest rate rises have begun to put an uncomfortable squeeze on suburban voters – Howard’s core electorate.

In fact, with pre-election poll results indicating that Howard may have trouble even holding on to his own seat in Bennelong, it looks as if he will need all his political finesse to retain his grip on power. 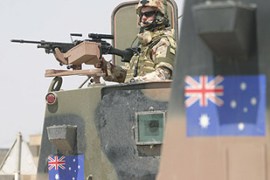