The president of the Philippines has called for a “zero casualty” target, as tens of thousands of people are evacuated from the path of typhoon Mitag.

The country is trying to avoid a repeat of last year’s devastating typhoon Durian, which killed 1,200 people and left 120,000 homeless when it crashed through the same area.

The storm was gathering strength on Friday with forecasters expecting it to hit the central Bicol region of the country over the weekend.

They have also warned it could change its current direction and hit the capital, Manila.

As a precaution workers have been dismantling advertising boards placed along Manila‘s major roads.

About 10,000 people living on the slopes of Mayon volcano in Bicol have already been evacuated.

Officials are worried that volcanic debris on the mountain’s slopes could be loosened by the storm and form deadly mudflows.

Glenn Rabonza, head of the country’s civil defence office, said coastal communities were also in danger, facing waves up to 10 metres whipped up by the typhoon.

In total officials say some 46,000 people have been moved to temporary shelters after the president, Gloria Macapagal Arroyo, ordered the pre-emptive evacuation of vulnerable areas.

Arroyo earlier cut short her attendance at a summit of South-East Asian leaders in Singapore to return home to coordinate the evacuation.

Vehicles including rubbish trucks, flatbed trucks and private vans have been commandeered by police to help move residents from areas considered at risk.

Schools and other buildings have been converted to temporary shelters with officials saying stockpiles of food and other essentials are on stand0by to last up to four days.

Mitag, packing gusts of up to 180kph, is expected to make landfall late on Saturday or early Sunday. 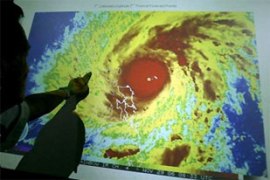 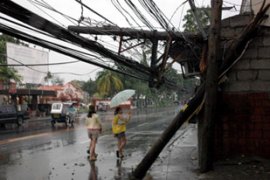 Utor kills four and causes tens of thousands to flee their homes. 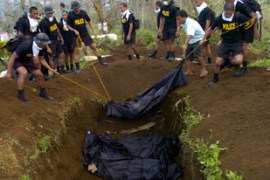 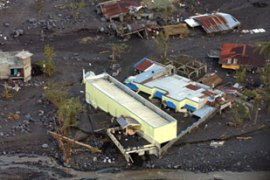