Cambodia’s UN-backed tribunal has held its first public court hearing for a Khmer Rouge figure since the movement’s reign in the 1970s.

The tribunal has arrested five former Khmer Rouge leaders and trials are expected to begin next year, almost three decades after the movement fell from power.

Many fear the ageing suspects might die before being brought to justice. Pol Pot, the leader of the Khmer Rouge, died in 1998 and was never brought to trial.

In detention since he was arrested in 1999, Duch is the first Khmer Rouge figure to make a public court appearance.

He ran the notorious S-21 or Tuol Sleng interrogation and detention centre in Phnom Penh, where an estimated 14,000 victims deemed opponents of the Khmer Rouge were tortured and executed.

He was also appointed the head of the “special branch” in charge of internal security for Democratic Kampuchea, known as the Santebal.

In 1979 Duch was one of the last senior Khmer Rouge leaders to escape from Phnom Penh ahead of the invading Vietnamese forces.

He allegedly oversaw the execution of some of S-21’s final prisoners before fleeing.

Duch and his family spent many years living on the Thai-Cambodian border and became a Christian pastor in the mid-1990s.

In 1999 he surrendered to Cambodian authorities. He is currently in jail in Phnom Penh awaiting trial.

The so-called Brother Number Two of the Khmer Rouge, Nuon Chea was the second in command to Pol Pot. 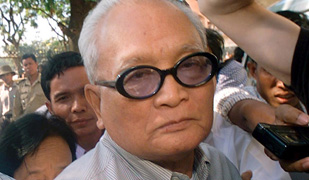 He was one of the founding members of the Khmer Rouge and a senior figure from its days as a guerrilla force fighting the US-backed Lon Nol government, through its four years in power and until his final surrender to government forces in 1998.

Documentary evidence, including notes attached to several confessions from victims of the S-21 interrogation centre in Phnom Penh have implicated Nuon Chea as a key player in devising and carrying out the Khmer Rouge’s mass execution policies.

Shortly after his surrender in 1998, as the last remnants of Khmer Rouge resistance broke down, Nuon Chea issued his first statement acknowledging the suffering inflicted on Cambodians during the Khmer Rouge rule.

Nuon Chea was arrested at his house near the town of Pailin, formerly a Khmer Rouge stronghold.

Born in the early 1920s, Ieng Sary was deputy prime minister and foreign minister of Democratic Kampuchea, the name the Khmer Rouge gave Cambodia during its time in power.

He first met Pol Pot when the two men were students in Paris and fled with him to the jungles of eastern Cambodia following a crackdown on communists in the early 1960s.

As foreign minister, Ieng Sary became the international face of the Khmer Rouge government and speeches he gave as well as other documentary evidence indicate he was active in rounding up individuals the Khmer Rouge deemed opponents.

In 1977, in a speech to the United Nations General Assembly, he apparently sought to justify purges of officials saying that “enemies of all stripes” were looking to undermine and destroy Democratic Kampuchea.

In 1979 after the Khmer Rouge was ousted from power, he was sentenced to death in absentia by the Vietnamese-installed government.

In 1996, with the group’s forces in sharp decline, he defected with a large coterie of followers, setting the stage for the total collapse of the Khmer Rouge two years later.

His belated turn of heart earned him a limited amnesty from then-King Norodom Sihanouk, but one that officials have declared does not apply to the current UN-backed tribunal’s charges.

He was arrested along with his wife, Ieng Thirith, at their luxury villa in Phnom Penh in November 2007.

The wife of Ieng Sary was social affairs minister for the Khmer Rouge.

Prosecutors say the 75-year-old participated in “planning, direction, co-ordination and ordering of widespread purges … and unlawful killing or murder of staff members from within the ministry of social affairs”.

She is the only woman of the five senior Khmer Rouge figures to have been arrested and charged.

Despite living in relative luxury in their post Khmer Rouge days, she and her husband sought legal aid after being arrested, saying they had no money for a lawyer.

Serving as the president of Democratic Kampuchea, Khieu Samphan was one of the most powerful officials in the Khmer Rouge government after Pol Pot.

Born in 1931 he was one of the key founders of the Cambodian communists who met as students in Paris in the 1950s.

He received a doctorate for his 1959 thesis on Cambodia‘s economy, which strongly advocated self-reliance, one of the key tenets of Khmer Rouge ideology.

In 1985, six years after invading Vietnamese forces evicted the Khmer Rouge from power, he officially took over from Pol Pot as the group’s leader, a position he held until his surrender to the government in 1998.

At the time of his surrender he urged Cambodians to “let bygones be bygones”.

Several years later, in a series of interviews 2004, he said he was shocked to learn of Khmer Rouge crimes.

“I have found it so difficult to believe what people told me of what happened under the Khmer Rouge regime, but today I am very clear that there was genocide,” he told interviewers.

Like Nuon Chea, Khieu Samphan lived in Pailin, close to the border with Thailand.

He was arrested in November 2007 days after being taken to hospital in the capital, Phnom Penh, reportedly for stroke.