Japan has ended naval operations in support of US-led forces in Afghanistan.

A stalemate in parliament provoked by opposition parties against the deployment saw the mandate for the mission expire without renewal.

Japan has refuelled coalition warships in the Indian Ocean since 2001, but an order by the defence minister will see the two ships and 340 troops return home later on Thursday.

Legislation has been repeatedly approved renewing the mission but the latest extension expired on Thursday after opposition in parliament.

The opposition Democratic Party led by Ichiro Ozawa has opposed the mission as it did not have the specific mandate of the United Nations.

Yasuo Fukuda, the Japanese prime minister, said that pulling out of the mission would leave Japan, which depends on the Middle East for much of its oil, sidelined in the fight against what he described as global terrorism.

Kozo Okuda, a spokesman for the navy, said it was expected to take about three weeks for the ships and crew to return to Japan.

The decision to recall the ships was met with disapproval by allies of the US and Japan involved in operations in Afghanistan. 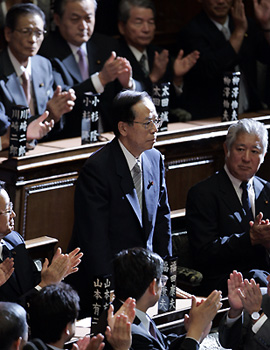 “Australia is concerned by the imminent cessation of Japan‘s  refuelling activities in support of coalition operations in  Afghanistan,” Alexander Downer, the Australian foreign minister, said in a statement.

“Defeating terrorists is one of the highest security challenges the world faces. It is a global challenge and combating terrorism is a collective responsibility.”

Japanese officials vowed Tokyo would soon be able to resume the mission.

“The government will make its utmost effort to pass the submitted bill to resume an important mission in the Indian Ocean,” Nobutaka Machimura, the chief spokesman for the cabinet, said on Thursday, just ahead of the current mission’s official conclusion.

He said he wants to see the new bill pass “as soon as possible” in the lower house.

Machimura stressed that Japan would also continue to play a major role in assisting Afghanistan financially in anti-terror and security missions.

But analysts said the current political disarray in Tokyo that recently saw Shinzo Abe resign as prime minister after the LDP lost control of the upper house of parliament, could have repercussions with the US alliance.

“I think ending the mission would give the impression to the US that Japan is not fulfilling its responsibility,” Yoshinobu Yamamoto, a political scientist at Aoyama Gakuin University in Tokyo, said.