A payment was reportedly made for the boat but Mwangura said he did not know about a ransom.
The Taiwanese vessel went free as five US warships were escorting two South Korean vessels to Yemen. The Korean ships, registered in Tanzania’s Zanzibar islands and released on Sunday, had also been held for five months.
Dangerous waters
The waters off Somalia are some of the most dangerous shipping lanes in the world.
A South Korean foreign ministry statement, released late on Sunday, said all 24 crew from the two ships – 10 Chinese, four South Koreans, four Indonesians, three Indians and three Vietnamese – were safe.
It said: “The government strongly condemns this international act of piracy where innocent crew members were kidnapped and detained for a long time, and proclaims it will join in the international community’s effort to stop such actions.”
Armed men attacked the vessels, the Mavuno 1 and Mavuno 2, off the Somali coast on May 15 as they were travelling to Yemen.
A North Korean cargo ship, the MV Dai Hong Dan, was seized by armed men last week of Somalia’s coast, but the crew managed to regain control of the vessel with assistance from the US navy.
Somali pirates are still holding two other ships: a Japanese-owned chemical tanker seized last week and a cargo ship registered in Comoros.
Piracy has been rife off Somalia’s coast since Siad Barre, the country’s former rule, was removed from power in 1991.
Many pirates claim to be “coastguards”, protecting their waters against illegal fishing and dumping of toxic waste.
Source: News Agencies 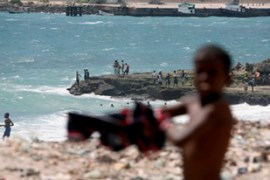 Cargo ship with 22 crew members on board said to be under the control of pirates.

Pirates in Somalia have released 25 seamen they kidnapped in April, according to official reports.

Somali pirates have hijacked a fuel tanker 150km north of Mogadishu, according to port officials.