After fierce fighting in the east in late August and early September, the United Nations mission (Monuc) in the DRC announced a limited truce on September 6 between the rebel Tutsi leader and the Congolese army.

But fresh clashes broke out on Thursday and over the weekend, and UN military sources said fighting was continuing on Monday in several parts of North Kivu province.

“Monuc thinks there is a ceasefire, but we’ve abandoned it,” Nkunda said.

He told Al Jazeera the government has always attmepted to find “agreeable solutions” to the situation.

The general denied that his forces were threatening the survival of the country’s endangered mountain gorillas and said that recent deaths of the primates were the government’s fault.

Reports on Sunday suggested the rebels had seized an area in eastern Congo that serves as a wildlife habitat for the animals.

Shelling and heavy gunfire could be heard from the headquarters of the Virunga National Park and rangers were forced to flee over the weekend, the international conservation group WildlifeDirect said on Sunday.

Only 700 mountain gorillas exist in the world, of which more than half live in the Virunga conservation area, a huge territory at the intersection of Congo, Rwanda and Uganda.

At least 10 of the rare animals have been killed this year.

The UN, which has a 17,000 strong peacekeeping force in the DRC, said it was closely monitoring the renewed fighting in several places in North Kivu province.

PK Tiwari , a UN military spokesman, said: “There’s some fighting going on now in Masisi [district]. It’s taking place in three locations, including Karuba and Ngungu, where they had already been fighting.”

The largely Hutu Democratic Forces for the Liberation of Rwanda (FDLR) rebels are accused of involvement in Rwanda’s 1994 genocide in 800,000 Tutsis and moderate Hutus were killed by a Hutu-led government and ethnic militias.

The fighting in North Kivu has displaced tens of thousands of civilians and foreign relief agencies have warned of a fresh humanitarian catastrophe in the DRC. 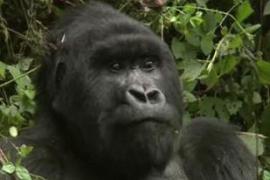 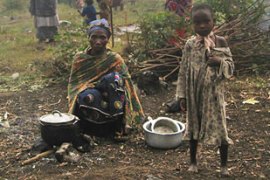 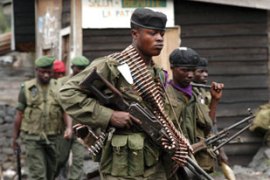