Clouds of dense, black smoke rose into the sky as firefighters, helped by residents, tried to put out the flames.

The explosion left twisted wrecks of cars scattered in the street, amid the blackened ruins of the shops.

A police official said 25 shops and 10 cars near a bus terminal in the Kurdish area of al-Haseer were destroyed.

A motorist who preferred anonymity said the blast shattered the windows of his car and he was wounded by flying glass.

“Kirkuk is not a place to live any more. Wherever you go there are roadside bombs and car bombs. The security forces cannot find a solution for the terrorism,” he said.

Kirkuk, which sits on Iraq‘s northern oilfields, is shared by Kurds, Turkmen, Shia and Sunni Muslims.

Kurds want it to be incorporated into their largely autonomous Kurdistan region, but Arab residents oppose this.

A referendum on the issue, due by the end of the year, is expected to be delayed until 2008.

Kirkuk‘s police chief escaped a car bomb attack on his motorcade earlier this month in which seven people were killed and 50 wounded. 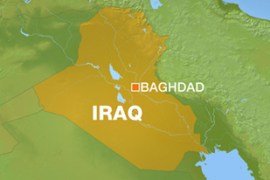 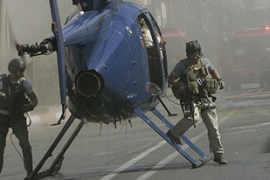