Some women and activists have suggested a quota system to ensure a minimum level of female participation in the council, which has no formal powers.

“Quotas would introduce discrimination within the Shura Council. As a woman, I am against that,” al-Riyami said.

Saturday’s vote was preceded by a public election campaign, a first for Oman, where most people still vote along tribal lines rather than on the policies of the candidates.

Saud bin Ibrahim al-Bousaidi, the interior minister, told the state-run Oman News Agency that turnout for the election had been “above expectations”.

But one female voter, who declined to be named, said some women in the tribal interior of the country had problems getting to polling stations since they rely on their menfolk for transport. Some also follow their male relatives’ lead when choosing which candidate to vote for.

The interior ministry said 388,683 people were registered to vote, with 632 candidates standing in 61 electoral districts. 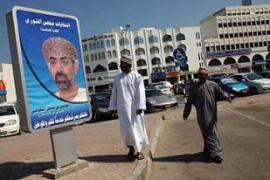 Polls to pick 84 members of council in Gulf monarchy where tribal links dominate.