Bomb attacks
Anatolia said helicopter gunships had also taken part in raids which followed the killing of 12 soldiers in a PKK ambush near the Iraqi border on Sunday.

Turkey has confirmed that eight soldiers are missing following the ambush.

On Tuesday, a pro-Kurdish news agency close to the PKK published what it said were pictures of the troops it said were being held by the group.
Anatolia said suspected PKK fighters had detonated two remote-controlled bombs in the eastern province of Tunceli as soldiers combed a rural area for landmines.
It said security forces had defused other explosive devices found in the area and there had been no casualties.

An operation against the PKK, backed by air cover, is under way in Tunceli, it said.
Economic sanctions
Meanwhile, Turkey’s national security council met in Ankara, the country’s capital, on Wednesday to discuss what action should be taken next.
The council, which comprises political leaders and the army chief of staff, said it would recommend that the government take economic measures against groups which aid separatist Kurdish fighters based in northern Iraq.
However, it is unclear how the move will go down with public opinion.
Mike Hanna, Al Jazeera’s correspondent in Ankara, said: “There is strong domestic pressure on the government… to take concrete action.”
Hot pursuit
Earlier on Wednesday, military and security sources said that warplanes had flown up to 20km into Iraqi territory and about 300 ground troops had advanced about 10km over the last three days.

– In search of Kurdistan

Thirty-four Kurdistan Workers’ party fighters were reportedly killed in attacks on their positions between Sunday and late on Tuesday.

Reports of the attacks came as the president of Iraq’s northern Kurdish region urged the PKK to end its armed campaign against Turkey. 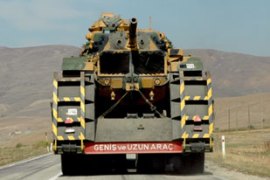