Zalmay Khalilzad, the US ambassador, urged “all relevant rebel elements” to participate.

“The eyes of the world will be on this meeting,” he said Monday.

“Everyone must have a cease-fire immediately when the meeting starts, the government and the rebel side.”

The announcement comes as three Sudanese government soldiers have reportedly been killed as they launched an attack on a camp for people displaced by the conflict in Darfur, the United Nations said.

The fighting at the Hamidiya camp near the western town of Zalengei came just days ahead of planned peace talks between Khartoum and rebel groups in the western province.

A UN spokeswoman said on Monday that troops moved in to the camp on Saturday after reports that residents had killed a government intelligence officer.

The Sudanese military did not immediately comment on the reported attack.

Rama Yade, France’s secretary of state for human rights and foreign affairs, said at the start of a two-day visit to Khartoum and Darfur on Monday that violence in Sudan’s remote west was worsening ahead of the talks.

Last week, residents in Kalma camp outside Nyala, the capital of South Darfur, reported a series of raids by government-backed militias.

The African Union, which has 7,000 peacekeepers in the region, later confirmed that the camp had been attacked and several people killed.

The state-controlled Sudanese Media Centre on Sunday reported that 10 per cent of Kalma’s population had fled since the violence, which it blamed on clashes between tribal groups in the settlement.

Khartoum denies arming militias or tribal factions in the region but has previously raided camps searching for rebel fighters.

International experts say that about 200,000 people have been killed during the last four years, while more than 2.5 million have been driven from their homes to seek refuge in camps such as Kalma and Hamidiya.

Khartoum says the figures have been exaggerated by the media and campaign groups.

Yade said she had delivered a letter from Nicolas Sarkozy, France’s president, to Omar Hassan al-Bashir, his Sudanese counterpart, setting out his concerns.

“There is still immense suffering,” she said.

“We know from Unicef that 35 children still die every day. We know that women are still raped. We strongly condemn those responsible for these serious crimes, which are crimes against humanity and war crimes.”

Yade also said the French government would increase its efforts to persuade defiant Abdel Wahed Mohamed Ahmed el-Nur, the founder of the Sudanese Liberation Army, to leave Paris and attend the talks in Libya.

Nur has demanded a series of concessions from the government to attend the negotiations.

“We will do all we can to persuade him to join those negotiations in the run up to that date,” Yade said. 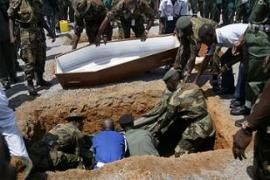 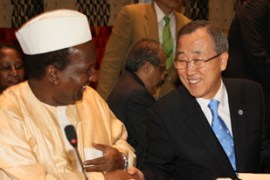 US passes 25m COVID cases, over a quarter of world’s infections