Violent country
Bhutto’s Pakistan People’s party (PPP) said the former prime minister would stay in Pakistan to fight elections expected in January despite the attack.
Al Jazeera’s Sohail Rahman in Karachi said the first bomb was detonated in a car metres in front of the truck carrying Bhutto and her entourage.
The interior minister said he believed the attacks were the work of suicide bombers.
Kamal Hyder, Al Jazeera’s correspondent in Islamabad, said on Friday: “The bomb disposal unit is saying these were planted devices. However, security aides who were close to Benazir say this was a suicide attack.
“Whoever carried out the attack, planned it very well. The attack is a signal of how violent Pakistan has become.
“Now the political parties are being lumped into religious or secular parties and that is a very dangerous divide for a place like Pakistan.”
Pervez Musharraf, Pakistan’s president, condemned the attack as a “conspiracy against democracy”.
Bhutto unhurt

Bhutto, who was resting inside her vehicle at the time of the blasts, was unhurt and was taken immediately to her family home.

Hundreds of thousands of people had lined the streets of Pakistan’s largest city to welcome the former prime minister back to the country.
Bhutto was on her way from the airport to a homecoming rally near the tomb of Mohammad Ali Jinnah, the founder of Pakistan.
The bombs exploded in quick succession just after Bhutto’s bus had crossed a bridge about halfway on her route from the airport to the tomb.
Two police vehicles bore the brunt of the explosions.
Azar Farooqi, Karachi’s police chief, said more than 6,000 police officers were deployed along the route, but it was difficult to ensure security as it was a slow-moving convoy.
Supporters of Bhutto’s PPP had been transported to Karachi from across the country and the huge number of people present made it difficult for emergency services to recover the dead and injured.

Al Jazeera’s Tim Friend in Karachi was on a motorway bridge over the scene of the attacks and described the scene following the blast as “carnage”.

BK Bangash, a photojournalist reporting on the procession, was about 50 metres from Bhutto’s truck when the first bomb exploded.

“People were shouting for help but there was no one to help them out. It smelled like blood and smoke,” he said.
Groups linked to al-Qaeda, who are angered by Bhutto’s support for the US “war on terror”, had threatened to assassinate her but Al Jazeera’s Kamal Hyder in Islamabad reported that some of these groups later retracted their comments.
Speaking from Dubai, Bhutto’s husband Asif Ali Zardari told the ARY television channel: “I blame government for these blasts. It is the work of the intelligence agencies.”
Musharraf’s government had approved the rally in Karachi and Wajid Shamsul Hasan, an adviser to Bhutto, told Al Jazeera that it was the responsibility of the government to assist in protecting her.

Bhutto had earlier described herself as “emotionally overwhelmed” upon her return to Pakistan.

Joyous scenes greeted her arrival as she stood on a truck designed to withstand a bomb attack as it edged through the throng outside the airport, ignoring police advice to keep behind its bullet proof glass.
She had earlier said she had no fears for her own safety saying that she had returned to Pakistan to do her “duty” and stand in national elections scheduled for January.
Faik Ali of Bhutto’s Pakistan People’s party rejected claims the former prime minister was wrong to return to Pakistan.
Source: Al Jazeera, News Agencies 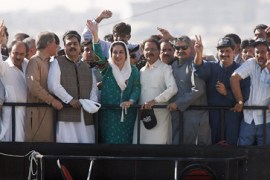