Colonel Joseph Tokolonga, head of the army’s 9th brigade, said: “We resisted but it’s strongly possible that the insurgents were reinforced because we already controlled several areas in this zone”.

Fighting could resume on Sunday, added Tokolonga, who was unable to provide any casualty figures.

Survivors and the United Nations painted a bleak picture of the fallout from the latest clashes.

The UN peacekeeping mission said thousands of civilians had fled the fighting.

Villagers from Bunagana and nearby settlements poured into Rutshuru, the local government-held administrative seat, about 0600 GMT.

“What I saw was horrendous. It was raining. They didn’t know where to go. Three women gave birth while they were fleeing,” Sylvie Van Den Wildenberg, spokeswoman of the UN’s peacekeeping mission in DR Congo (MONUC), said in North Kivu.

“The humanitarian consequences of whatever is happening there are very serious.”

MONUC appealed for all sides to cease fighting and deployed three helicopter gunships to patrol the area to “pressure” the warring sides to stop the fighting, a spokeswoman said.

The eastern province of Nord-Kivu has been the site of rebellions that have plunged DR Congo into wars on two separate occasions, from 1996 to 1997 and from 1998 to 2003.

Wildenberg said the new clashes showed that “ethnic tensions are taking on serious dimensions in the region,” where she said both the Nkunda and Mai Mai forces were accused of forcibly recruiting child soldiers.

Since the end of last year, violence in Nord-Kivu has prompted  more than 370,000 people to flee, and the UN estimates that about 750,000 are displaced in total. 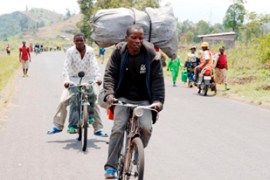 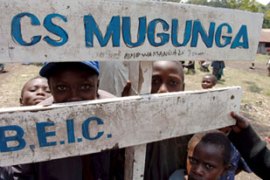