Tozim Potopere, chief of the independent National Electoral Commission, said results for the seven remaining seats were still being tallied and would be released later on Thursday.

Counting has not been completed in two constituencies, including Lome, the capital, where the UFC appeared to be leading, leaving seven seats still up for grabs.

Once the full results are announced, they will be presented to the constitutional court to be confirmed. The court can also hear any legal challenges.

Officials said turnout was 95 per cent, reflecting enthusiasm for the election in which opposition parties participated for the first time in 13 years. They had boycotted the last parliamentary elections in 2002, arguing that the process was rigged.

The ruling party’s founder, Gnassingbe Eyadema, died two years ago after ruling the country for 38 years.

Hundreds of opposition supporters were killed by security forces when the army named his son, Faure Gnassingbe as president in a move that violated the constitution. Tens of thousands more fled the country.

The RPT based its campaign on what the president had achieved in office in the way of reconciliation and improving relations with the opposition.

Esso Solitoki, secretary of RPT, said: “This is a victory for the Togolese people who voted massively. Together we shall rebuild this country.”

Observers from the Economic Community of West African States
(Ecowas) reported on Tuesday that the election was “free, fair and open”.

The 15-nation group sent 152 military and civilian monitors to track the poll.

European Union observers were also among more than 3,500 Togolese and foreign observers monitoring the poll.

It is hoped the elections will lead to a resumption of international aid to the country, which has had decades of authoritarian rule and periods of bloody unrest since independence in 1960.

The EU, once Togo‘s biggest donor, froze most aid to the country in 1993, citing a poor democratic record. 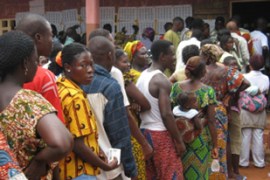 Voters choose between more than 2,000 candidates from 31 political parties. 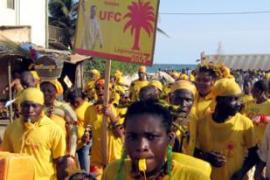 Vote to test ruling party’s grip on power and whether the country will get EU aid.