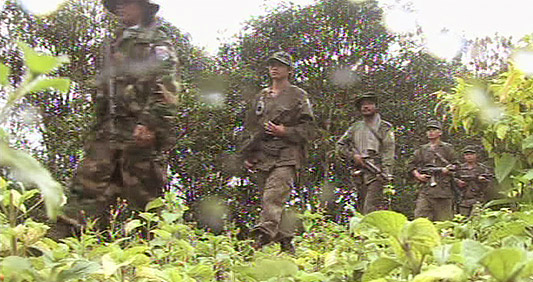 While the recent protests in Myanmar were staged by pro-democracy campaigners, the government has been waging a longer battle with the country’s ethnic minorities.

There are 100 ethnic communities in Myanmar, but the main ones are found in the state of Chin in the west, and Shan and Karen in the east.

They make up roughly one-third of Myanmar‘s population of 47 million but decades of fighting have seen more than 500,000 people flee across the border to neighbouring countries, mostly to Thailand.

Although a number of groups have signed ceasefire agreements with Myanmar‘s military government some, including those in Karen, continue their armed struggle for autonomy with the help of more than 11,000 members.

The Karen National Liberation Army is headquartered near the Myanmar-Thai border, near the banks of the Moei River where traditional long-tail boats ferry passengers up the muddy waters.

From inside this mountainous border region, ethnic soldiers have been fighting government troops for more than half-a-century, and continue to despite the brutalities inflicted on their people.

Known only by his first name, Commander ‘Johnny’ has been fighting this battle for 43 years.

He said he became a soldier when he was 16 after witnessing government soldiers burn down his village and kill his friends and relatives.

Four decades on, ‘Johnny’ commands the 7th brigade in Karen state whose numbers are dwindling although the recent protests in Yangon has spurred them on.

“The students and the monks in the next province say they want to join hands together and fight. The people want to negotiate with the government to stop the violence,” he told Al Jazeera. “If the Burmese government does not stop, the students, the monks and the people will continue to fight.”

The Karen fighters say they are prepared for future battles if Myanmar‘s ruling generals fail to honour an agreement to hold talks with the country’s opposition groups.

Even the young, such as So Mrai Narng, know only too well the brutalities that were being committed against the country’s ethnic minorities.

Drafted into the national army when he was just 11, the former child soldier was forced to commit atrocities against innocent civilians.

So Mrai Narng said he was ordered to go up the mountains and destroy Karen villages and kill everyone.

“My commander put all the weapons and the bullets in my knapsack. I told him it was too heavy and I was too small to carry it. But he would not listen. I was suffering,” he told Al Jazeera.

“When we went to a temple the rangers would not respect the monks. I am a Buddhist. But I have no power to say anything.”

Another one who felt powerless is Myo Man Thu, who joined the Karen army for revenge against the government.

He said the latest violence on the streets of Yangon was not the first time the security forces have turned on Buddhist monks.

“It is not the first time they beat the monks. I saw it when I studied in the capital. The soldiers beat the monks and the people because the government wants to show their power,” he said.

“They want to control the people. If the people protest they will lock up the protesters or kill them.”

With an army of about 400,000 soldiers, there is little the Karen can hope to achieve by going against the military government.

But like other ethnic groups – the Shan, the Mon and the Karenni – the Karens have vowed to continue their fight for freedom.