The arrests came as tens of thousands of people have attended a pro-government rally in Yangon and a UN envoy sought to increase the pressure on the country’s military rulers.

Saturday’s rally, which was held at the city’s main sports ground, was attended by officials who spoke out in support of the government.

The military has staged similar rallies around the country, but this was the first in Yangon since a crackdown on anti-government protests last month left at least 10 people dead.
Foreign media were barred from attending the rally and the streets around the stadium were blocked.

Residents of Yangon said that people were taken in buses from around the city after being ordered to attend.

“Every factory in the industrial zone had to send at least 50 people to attend,” one resident told the AFP news agency.
Thai inaction
Ibrahim Gambari, the UN’s special envoy, was meanwhile due to arrive in Bangkok, the Thai capital, to build pressure on Myanmar to introduce democratic reforms.
However, Thailand’s own military government said on Saturday that it would not take action against Myanmar over the crackdown.

Surayud Chulanont, the Thai prime minister who came to power following a military coup in September 2006, said any action by his interim government in Bangkok could cause problems for the new government that comes to power after December elections.

“As a Buddhist country, we disagreed with the violence dealt out by the Myanmar government, especially against the monks,” Surayud said in his weekly television address.
“But if we do anything that will cause bad feelings with our neighbour, that will be problematic for the new elected government,” he said.
Thailand remains one of the few countries with any sort of leverage on Myanmar, mainly because it buys around $2 billion of natural gas every year from its neighbour – nearly half of all Myanmar’s export earnings.
UN effort
Gambari is expected to prepare the ground for a return visit to Myanmar following his mission there last month, when he met Than Shwe, Myanmar’s military leader, and Aung San Suu Kyi, the detained pro-democracy activist.
The UN Security Council issued a statement last week deploring the crackdown and calling for the release of thousands of political prisoners.
Myanmar’s official media on Saturday called the UN statement “regrettable”, but vowed to co-operate with the world body while pressing ahead with its own “road map” to democracy.
“The basic principle of the foreign policy of the Union of Myanmar is to maintain friendly relations with other countries in the region and in the world, and to have close co-operation with the United Nations,” it added.
But it made no acknowledgement of the UN calls for the release of political prisoners and to engage in a dialogue with Suu Kyi.
Protests in Myanmar began in mid-August after a crippling rise in fuel prices, and escalated into the biggest challenge to the government since student-led protests were crushed in 1988.
Source : News Agencies 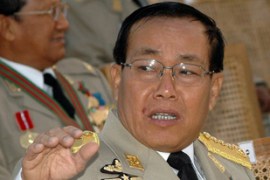 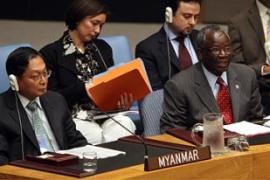 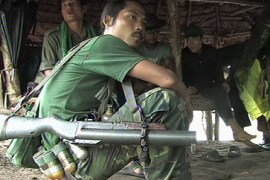