While tens of thousands of Iraqis often mass for religious festivals, a pervasive fear of violence means public protests against US or Iraqi government policy are seldom seen.

The US military, which had no immediate comment, has previously said it is erecting concrete walls in at least five areas of Baghdad.
In al-Washash, some small concrete blocks have been placed across a road and the protesters say the US is planning to replace them with a high wall next week.
Another tribal leader, who did not give his name, said: “The occupiers are planning to build a wall around our area but we see that as them putting the area under siege.
“This is a secure area and this is a peaceful demonstration to condemn it.”
The march passed peacefully, although police said two civilians were wounded in clashes with the Iraqi army afterwards.
Protection
The US say they aim of the walls is to protect the areas from violence as part of a US security crackdown, launched in mid-February, which involves 30,000 extra US troops.
The security push is seen as a final attempt by the US military to stem sectarian violence between Shias and Sunnis.
While the so-called surge is being credited with a marked drop in civilian and US casualties in September this year, car bombs and sectarian killings still occur daily.
US air strikes on al-Washash in September killed at least 14 people including one woman and destroyed 11 houses, Iraqi police and residents said.
The US military said its troops came under fire from gunmen on rooftops in the area.
Source: News Agencies 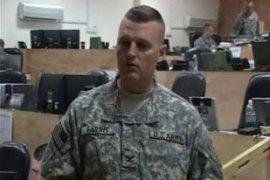 US army to continue Baghdad wall

US army says Iraq’s prime minister told them to finish the wall around Adhimiya. 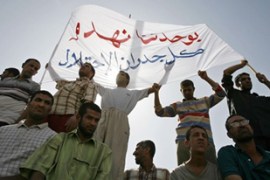 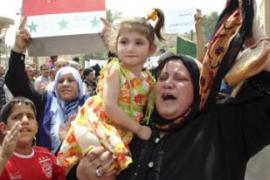 US to ‘respect Iraqi view’ on wall

Al-Maliki says he wants the building of the wall in Adhamiyah to stop. 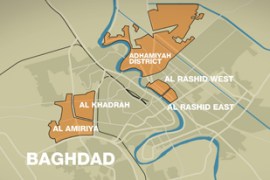