‘Survivor’
On Friday the humanitarian affairs ministry raised its provisional death toll from the accident to 51 from 38.
Saleh Kinyongo said this could rise further as new information came in from the crash site and from hospitals in the sprawling riverside capital.

He told Reuters that a Congolese mechanic on board the plane had survived the accident and was alive in hospital.

Kinyongo said: “We now know there is a survivor in hospital. He’s the mechanic (of the plane).”

The accident was the fourth deadly crash involving old Soviet-era aircraft since June, and news of Kuseyo’s sacking came as Red Cross workers were still searching through rubble at the impact site.

At least 31 people were injured on the ground when the plane came down and ploughed through several houses before exploding in flames.

In March the minister had sought to enforce a policy of halting flights by more than 30 private firms and told 18 others to conform with safety standards.

This was followed by an order in September for all Antonovs to be grounded.

Joe Bavier, a local journalist, told Al Jazeera that the aircraft crashed into a densely populated slum, and that there were reports that houses had been struck by the aeroplane.

An airport security official who visited the crash site told Reuters that fire crews had experienced difficulty in reaching the burning wreckage.

“There are at least four houses burning, the airplane is burning… There’s a lot of smoke and flames, everybody in the houses must be dead,” he said.

Papy Kangufu, a resident, told the Associated Press that dense smoke at the crash site was making it difficult to assess the scale of death and injury.
Safety record
Cargo aeroplanes in Congo are often flown by pilots from former Soviet states, but the aircraft are often poorly maintained and overloaded.
DR Congo’s air safety record is one of the world’s worst and was called an “embarrassment” by the International Air Transport Association last year.
Africa One airlines is on the European Union (EU)’s list of banned airlines.
All but one of the airlines certified by the DR Congo authorities are banned from the EU.
In 1996, 300 people were killed when an Antonov AN-32 crashed after take-off from Kinshasa’s main airport and ploughed into a crowded open-air market.
Source : Al Jazeera, News Agencies 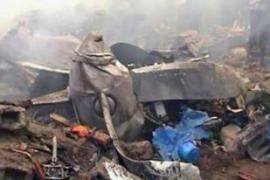 Many dead as aeroplane crashes into residential neighbourhood in capital Kinshasa.