“We are exploring many options, including fencing and mining selectively to discourage people from going across the border, people who are not welcomed on the other side.”
Aziz also called on the Afghan authorities to look inside their own country for sources of the growing violence that threatens Karzai’s government.
Tribal council
The Pakistani prime minister said the government had established a commission to look at plans to call a council, called a jirga, in the ethnic Pashtun areas along the border where Taliban militants are rooted.

Karzai also said he was “not satisfied” with Pakistan’s efforts to organise the council.

The Afghan leader raised the idea at talks late last year with the US president, George Bush, and the Pakistani president, Pervez Musharraf, who agreed to the plan.
A similar meeting is set to take place on the Afghan side of the border.
Karzai said the jirgas would help find out “who is blowing [up] bombs in Afghanistan, who is burning Afghan schools.”
Worsening violence
The Afghan president called on Aziz to stem the cross-border movement of Taliban supporters carrying out attacks in Afghanistan.
The countries are at loggerheads about the growing violence in Afghanistan, which accuses Pakistan of not doing enough against factions alleged to be training and funding Islamist fighters.
“The gap between Afghanistan and Pakistan unfortunately is widening,” Karzai said.
Pakistan is to increase its grant assistance to Afghanistan by 50 million dollars, and will extend a railway line from the Pakistan border town of Chaman to the nearby Afghan town of Spin Boldak, Aziz said.
Karzai and Aziz said the countries planned greater interaction to address a lack of trust and “misunderstanding” between them.
Pakistan helped the Taliban to power in 1996 before disowning them after the September 11, 2001 attacks that were blamed on Al-Qaeda leaders taking refuge in Afghanistan.
Violence is growing in Afghanistan with more than 100 suicide bombings last year and almost daily clashes between the Afghan army and insurgents.
About 4,000 people – including 1,000 civilians, but mostly fighters – died last year in the unrest, four times more than the previous year.
Source : News Agencies 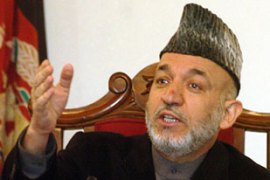 Officials say mining the border with Afghanistan will add to civilian casualties.

Pakistan to mine Afghan border

Afghanistan rejects plan and urges Pakistan to confront terrorists in a real manner.