More than three-quarters of Ecuadoreans back Correa’s call for referendum to decide whether to convene an assembly with broad powers to draft a new constitution, according to a recent opinion poll.

Thousands of protesters shouted, “Yes to the popular assembly” and “Congressmen go home”.

Jorge Cevallos, president of the congress, said the protests forced him to close the legislature.

“We call on the world to see what is happening in this country, where the rule of law is not respected and we are living a dictatorial attitude,” Cevallos said.

The president said it was up to congress “put out the fire they started”.

“The fight here is between congress and 13 million Ecuadoreans,” Correa said. He added that his referendum request will move forwards even with congressional opposition.

Opposition politicians have said they could move congress out of the capital, Quito, if street protests continue and have complained that the government is providing insufficient security.

Correa was elected in November promising to introduce sweeping reforms to curtail the influence of traditional political parties that many Ecuadoreans blame for the country’s political instability.

While Correa enjoys a 73 per cent approval rating, congress is widely seen as corrupt and inefficient and is favoured by only 13 per cent of Ecuadoreans, according to a recent Cedatos Gallup opinion poll.
Source: News Agencies 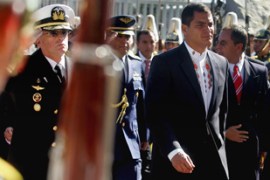