On the tenth day of Muharram, known as Ashura, Shias beat themselves with sharpened chains during processions to mourn the anniversary of the death of Hussein, a grandson of the Prophet Muhammad, during a battle in Kerbala, a city in modern-day Iraq, in AD 680.
There has been a spate of sectarian attacks in the days leading up to this year’s Ashura.
Thousands of people have been killed in sectarian violence in Pakistan since the 1980s due to feuding Sunni and Shia extremist groups.
Shia make up around 15 per cent of the mostly Sunni Muslim nation.
Source: News Agencies 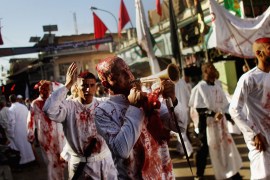 Unknown attackers have fired rockets and other weaponry on a Pakistani town still reeling from a suicide bombing during a Shia holiday.