The nomination indicated that Bakiyev is trying to lay to rest a three-month political crisis in which legislators have twice rejected his first choice candidate for premier, Felix Kulov, a high-profile, but divisive figure.
Corruption charges
A third “no” vote in parliament could have triggered dissolution of the legislature and new elections.
Kyrgyzstan, a former Soviet republic of 5.2 million people, has been struggling to stabilise since a revolution led by Bakiyev and Kulov in 2005 to overthrow Askar Akayev, the former leader.
Kulov is a former senior police officer who was imprisoned on corruption charges under Akayev, but freed during the revolution.
He served as prime minister until resigning last month and had hoped  to be reappointed.
In an interview with the Agym newspaper on Friday, Kulov said he had been betrayed by his ally.
“What can you say about this person who did not keep his word?”
He said he was “very tired”.
Source: News Agencies 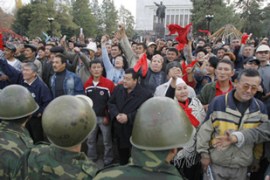 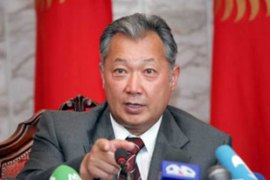 Kyrgyzstan’s parliament vows to stop the president from appointing a prime minister.

Opposition group says signing the document is a criminal act.