Tuesday also marked the start of a three-day armistice for Somalis to voluntarily surrender their arms to government-designated centres.
But despite government claims, reports suggested that the armistice centres have not been a success and even with a UN arms embargo on Somalia, Mogadishu remains one of the most gun-infested cities in the world.
The government’s success will be judged on whether it can install itself in Mogadishu, the capital, and restore central rule to the country for the first time since 1991.
An Al Jazeera correspondent said on Tuesday that Mogadishu residents felt collecting weapons at this time was not a good idea because the government had not yet deployed policemen in the city and security remained a big concern.
Organisations and individuals, mostly businessmen, have expressed the fear of theft and robbery in the absence of firearms for self-defence, he said.
No surrender
For their part, Islamic Courts leaders have said they will not surrender to the government.
Abdirahim Ali Mudey, a spokesman for the militia, was reported as saying: “If the world thinks we are dead, they should know we are alive. We will rise out of the ashes.”

He said that any power the government wielded was thanks to its backing by Ethiopian forces and predicted a return of the “chaos and violence” Somalia knew before the Islamic Courts’ campaigns.

As if on cue, suspected Islamic Courts fighters attacked an Ethiopian camp, killing two Ethiopian soldiers and wounding another one, AFP reported on Tuesday.
Local officials and residents said said the assailants emerged from a jungle and opened fire at an Ethiopian camp in Jilib, about 100km north of the key southern port town of Kismayo, which the Islamic Courts lost on Monday.
“The first insurgency attack has been carried out,” said  Mohamoud Dahir Farah, the chairman of the local authority.
Ethiopian backing
Ethiopia, which has backed the Somali government, described its operations in Somalia as being within weeks of completion.
In an interview aired by Al Jazeera on Tuesday, Meles Zenawi, the Ethiopian prime minister, said that his country was not an invading or an occupation force, and that his troops would pull out in two weeks.
Ethiopia did not choose to enter Mogadishu, but was asked to do so by tribal leaders, he said.

Separately, Zenawi told the country’s parliament that Ethiopian troops were not peacekeepers and it would be too costly to keep them in Somalia for much longer.

He said “we will stay in Somalia for a few weeks, maybe for two weeks”, and called on the international community to act quickly to send peacekeeping forces to Somalia.

“It is up to the international community to deploy a peacekeeping force in Somalia without delay to avoid a vacuum and the resurgence of extremists and terrorists.”

Somalia’s transitional government and its Ethiopian allies have for a long time accused the Islamic Courts of harbouring al-Qaeda activists.
Although the militia denies any link to al-Qaeda, Osama bin Laden, al-Qaeda’s leader, and Ayman al-Zawahri, bin Laden’s deputy, have issued statements saying they see Somalia as a battleground in their global war on the West.
Three suspects wanted by the US for the 1998 bombings of US embassies in East Africa are believed to be Islamic Courts leaders.
Kenyan support
In other news, Abdullahi Yusuf Ahmed, Somalia’s president, met with Mwai Kibaki, the Kenyan president, in Mombasa on Tuesday.
Kibaki said Kenya would not be used as a refuge for people seeking to destabilise governments in the region.
Kenya, which has voiced support for the Somali government, has already deployed troops and armoured vehicles along its 675km border with Somalia in an attempt to seal its border with Somalia, officials said.
Anthony Kibuchi, the Kenyan provincial police commander on the border, said on Monday that 10 foreigners had been arrested as they tried to cross into Kenya.
Border post hit
In a related development, Kenyan officials said four Ethiopian helicopters pursuing the Islamic Courts missed their target and bombed a Kenyan border post, prompting Kenyan fighter planes to rush to the area.
A top Kenyan police official, who requested to remain unnamed, said the helicopters targeted the Somali town of Dhobley, about 3km from the frontier line, only to end up dropping bombs on Kenya’s Har Har border post.
There was no immediate mention of the casualties and damage on  the grounds hit.
“Four military helicopters flew over our town several times and bombarded somewhere on the Kenyan side of the border,” said Mohamud Ilmi Osman, a  Dhobley resident.
Source : News Agencies 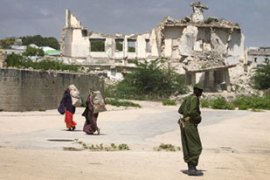 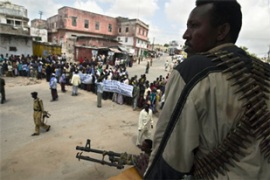 The government says all Somalis must hand over their weapons within three days.

Advancing Ethiopian troops force fighters of the Union of Islamic Courts out of Kismayu.