Bangladesh formed part of British India until the end of colonial rule in 1947, when it became East Pakistan.

Independence was achieved in 1971 following a nine-month guerrilla war by Bengali nationalists backed by the Indian military.

Bangladesh is one of the most densely populated and poorest countries in the world.

The majority of its 147 million citizens live in poverty, with over half forced to survive on less than one dollar a day.

Bangladesh is a secular nation although Muslims form a majority of its population.

What is the political situation in Bangladesh?

The country is run as a multi-party parliamentary democracy with the prime minister at the head of the government.

The two main parties are the Bangladesh Nationalist Party (BNP) and the Awami League.

Divisions between the two have subjected the country to violent coup and countercoups.

The BNP and the Awami League have both regularly boycotted parliament and staged national strikes as negotiating tactics when in opposition.

What are the details of the current crisis?

So bitter are the political divisions in Bangladesh that one of the 13 amendments made to the constitution since 1972 stipulates that a caretaker government takes over 90 days before any election to organise the vote and ensure its impartiality.

However, after Khaleda Zia of the BNP stood down at the end of her five-year term as prime minister on October 28 last year, the political parties have clashed over the appointment of the interim administration and at least 25 people have been killed.

Iajuddin Ahmed, the president, took over as head of the caretaker government but a 19-party opposition alliance, led by the Awami League, accused the temporary administration of favouring the BNP and organised a series of protests and nationwide strikes.

The resulting violence has so far left 45 people dead.

The Awami League and its leader Sheikh Hasina Wajed has claimed the voter list for the election has flaws, including fake names.

Earlier this month, the Awami League-led opposition alliance said it would boycott elections scheduled for January 22 unless the caretaker government met two main demands – the resignation of Ahmed and the revision of the voter list.

The alliance is also demanding the use of transparent ballot boxes and the removal of about 345 field-level election officials it alleges are biased towards Khaleda Zia.

Last month, the US-based National Democratic Institute’s Dhaka office said in a report that 10m names on the current voting list were “errors” or duplications – representing 13 per cent of the country’s 93m voters.

The UN and the European Union election observation mission have also suspended activities and support for the country, citing lack of legitimacy of the balloting.

On January 11, in the wake of mass protests and the threat of more violent demonstrations ahead of the vote by supporters of the opposition, Iajuddin stood down as leader of the interim government, postponing the elections.

He also declared a state of emergency, imposing an indefinite nighttime curfew.

Who are the principal players?

The current crisis is linked to the personal enmity between the leaderships of the Awami League and the BNP, as well as a longstanding disagreement over the country’s declaration of independence from Pakistan in 1971.

The Awami League says it was the party’s late supreme leader, Sheikh Mujibur Rahman, Hasina’s father, who declared the nation independent over state radio before being arrested by Pakistani troops.

But the BNP rejects this claim and say it was Khaleda’s late husband, army major Ziaur Rahman, who proclaimed independence.

He was killed, along with most of his family, in a military coup in August 1975.

After a period of political turbulence, Ziaur Rahman came to power and went on to win presidential elections before he was also killed in an coup in 1981.

Lieutenant-General Hossain Mohammad Ershad, the army chief, seized power in 1982, suspending the constitution and imposing martial law. But popular protests and general strikes led by Khaleda Zia and Hasina resulted in his resignation in 1991.

Since unifying their forces to topple Ershad, however, the two women have been political rivals.

So far, Khaleda Zia has been prime minister twice and Hasina once.

What will happen now?

After his resignation as head of the caretaker government, Iajuddin swore in Fakhruddin Ahmed, a former governor of Bangladesh’s central bank, as the interim leader.

Under the constitution, the state of emergency suspends the fundamental rights of citizens, including holding rallies and protests and restrictions have been put on the media.

As most of the presidential advisers resigned along with Iajuddin, it is unlikely that elections will proceed as scheduled.

Government officials have said it could take months for a new vote to be organised. 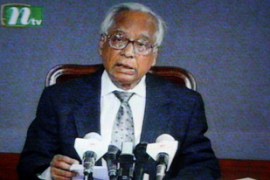 New date for elections now uncertain as a curfew is imposed across the country. 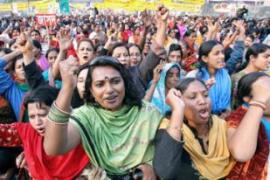 Bangladesh imposes a curfew as it declares a state of emergency.